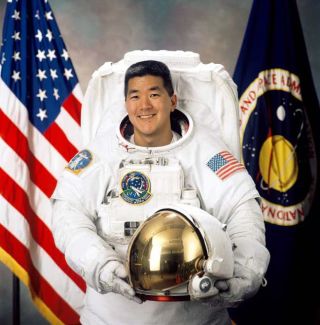 EDUCATION: Graduated from Glenbard East HighSchool, Lombard, Illinois, in 1979; received a bachelor and a master of sciencedegree in mechanical engineering from Massachusetts Institute of Technology(MIT) in 1984 and 1988, respectively.

EXPERIENCE: After Tani received his bachelor'sdegree from MIT, he worked at Hughes Aircraft Corporation in El Segundo,California as a design engineer in the Space and Communications group. In 1986,he returned to MIT and received his master's degree in mechanical engineeringin 1988, specializing in human factors and group decision making.

After graduation, Tani worked for Bolt Beranek andNewman in Cambridge, Massachusetts, in the experimental psychology department.In 1988, Tani joined Orbital Sciences Corporation (OSC) in Dulles, Virginia,initially as a senior structures engineer, and then as the mission operationsmanager for the Transfer Orbit Stage (TOS). In that role, he served as the TOSflight operations lead, working with NASA/JSC mission control in support of thedeployment of the ACTS/ TOS payload during the STS-51 mission in September1993.

Tani then moved to the Pegasus program at OSC as thelaunch operations manager. In that capacity, he served as lead for thedevelopment of procedures and constraints for the launching of the air launchedPegasus unmanned rocket. Tani also was responsible for defining, training, andleading the team of engineers who worked in the launch and control room.

NASA EXPERIENCE: Selected as an astronaut candidate by NASA in April1996, Tani reported to the Johnson Space Center in August 1996. Havingcompleted two years of training and evaluation, he qualified for flightassignment as a mission specialist in 1998.

He held technical duties in the Astronaut OfficeComputer Support Branch, and EVA Branch and has served as a Crew SupportAstronaut (CSA) for Expedition-4.Tani flew on STS-108 in 2001, and has logged over 11 days in space, includingover 4 EVA hours in one space walk.

In 2002, he was a crewmember on the Aquarius undersearesearch habitat for 9 days as part of the NEEMO-2mission (NASA Extreme Environment Mission Operations). Tani then trainedand qualified as the backup flight engineer for Expedition11, which launched aboard the Soyuz TMA-6 in April 2005.

He is currently assigned as a flight engineer for Expeditions15 and 16. He will launch to the International Space Station (ISS) aboard STS-120and will return aboard STS-122,living and working for several months on the ISS. During that time he willperform 3 spacewalks and numerous robotic operations in support of theinstallation and checkout of Node-2, now named Harmony.

SPACE FLIGHT EXPERIENCE: STS-108 Endeavour(December 5-17, 2001) was the 12th shuttle flight to visit the International SpaceStation. During the mission Tani served as Mission Specialist-2.