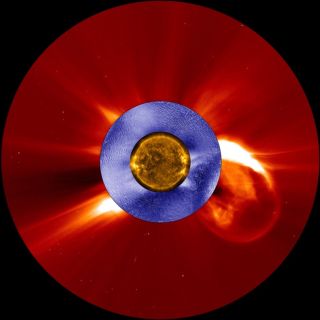 This composite image shows a coronal mass ejection — a huge eruption of solar plasma — as seen from two space-based solar observatories and one ground-based instrument. The image in gold is from NASA’s Solar Dynamics Observatory spacecraft; the image in red is from the ESA/NASA Solar and Heliospheric Observatory; and the image in blue is from the Manua Loa Solar Observatory’s K-Cor coronagraph.
(Image: © NASA/ESA/SOHO/SDO/Joy Ng and MLSO/K-Cor)

Earth's sun is an active star that repeatedly unleashes powerful flares and huge eruptions of solar plasma known as coronal mass ejections (CMEs). These dramatic events can send fast-moving solar energetic particles, or SEPs, streaming toward Earth. While the planet's magnetic field and atmosphere serve as a protective shield, astronauts in low-Earth orbit are potentially susceptible to the harmful effects of such solar outbursts.

Researchers who developed the new technique used an instrument called a coronagraph, which blocks the sun's bright light and allows astronomers to see what's going on in the sun's corona, or outer atmosphere. With this tool, scientists from NASA and the National Center for Atmospheric Research (NCAR) in Colorado found a way to detect SEP activity tens of minutes earlier than current forecasting techniques allow, which will ultimately help protect astronauts in space, NASA officials said a statement. [The Sun's Wrath: Worst Solar Storms in History]

Most of the current space-weather research uses space-based coronagraphs. The new technique, by contrast, employs ground-based coronagraphs, which can deliver observations "almost instantly, and at a much higher time resolution than satellite instruments," NASA officials said.

"With space-based coronagraphs, we get images back every 20-30 minutes," Chris St. Cyr, a space scientist at NASA's Goddard Space Flight Center in Greenbelt, Maryland, said in the statement. "You'll see the CME in one frame, and by the time you get the next frame — which contains the information we need to tell how fast it's moving — the energetic particles have already arrived [at Earth]."

Solar particles released during a CME are extremely energetic and can move at nearly the speed of light. For the recent study, scientists used observations from the ground-based coronagraph called K-Cor, which is part of NCAR's High Altitude Observatory and resides atop Hawaii's Mauna Loa volcano.

"Currently, processed images from K-Cor are available on the internet in less than 15 minutes after they're taken," Joan Burkepile, a study co-author based at NCAR and principal investigator for the K-Cor instrument, said in the statement from NASA. "We're installing a more powerful computer at the observatory in Hawaii to process the images seconds after they are acquired, and provide the data on the internet within a minute or two of acquisition."