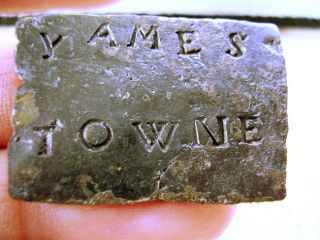 This lead cargo tag -- which reads "Yames Towne" -- is believed to have been discarded from a shipping crate or trunk arriving at Jamestown, the site of the first permanent English settlement in the Americas, from England in about 1611. NASA will fly this artifact and two sets of Jamestown commemorative coins aboard Space Shuttle Atlantis in March 2007.
(Image: © NASA.)

The 17th-century metal worker who prepared a tag to markcargo heading for the New World could have never imagined that hiscraftsmanship would eventually be leaving the planet.

Upon completion of its journey however, his small metalmarker etched with the name of its destination, "Yames Towne" willhave logged more than four million miles over four centuries, traveling fromEngland to the early American settlement and then, 400 years later, on a roundtrip to the InternationalSpace Station (ISS) [image].

NASA is flying thetag, along with four commemorative coins to honor early American explorers.They will be onboard spaceshuttle Atlantis during missionSTS-117, targeted for launchin March [image].

The metal cargo tag was unearthed this past summer atJamestown, the location of the first permanent English settlement in theAmericas in 1607. The colonial version of a modern-day luggage tag, the plaquewas probably marking some merchandise that had been warehoused in London beforebeing shipped, according to the Historic Jamestowne website.

"The odd 'Y' spelling may suggest a German or Dutchorigin for the goods as those languages represented 'j's with 'y's during thistime period," the site reports.

It was found at the bottom of a well at the site of JamesFort on Jamestown Island. The tag, attached to a crate or trunk, most likelyarrived from England around 1611.

"This artifact clearly marks Jamestown as a destination-- our nation's first 'address.' It demonstrates the development of tradepatterns crucial to the survival of the colony," said William Kelso withthe Association for the Preservation of Virginia Antiquities.

Kelso leads the Jamestown Rediscovery Project that hasunearthed more than one million artifacts at the site.

Two sets of Jamestown-themed coins, authorized by Congressand recently issued by the U.S. Mint, also will fly aboard Atlantis.

The tag and coins were presented to NASA Langley ResearchCenter Director Lesa Roe by Virginia Secretary of Technology Aneesh Chopra atAeroSpace Day in Richmond on Wednesday.

"This exploratory shuttle flight connects ouradventurous past with the innovation and continued intellectual curiosity thatguides our future as we commemorate America's 400th anniversary," saidGovernor Tim Kaine.

"Remembering the spirit of adventure that led to theestablishment of Jamestown is appropriate as this country works towardestablishing a permanent outpost on another planetary body," said Roe.

Each commemorative coin set contains a $5 gold piece and asilver dollar with visual references to Jamestown's legacies. When returnedfrom space, NASA will present one set to Kaine for display at JamestownSettlement, a 17th century living history museum. The second set will bedisplayed at the National Park Service's visitor center at Historic Jamestowne.

NASA will return the shipping tag to Historic Jamestowne fordisplay in its Archaearium, a new museum for items unearthed during excavationsover the past 13 years that include the long lost remains of James Fort. Thefort was believed to have eroded into the James River.