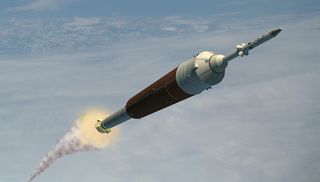 The Orion crew vehicle launches on board the Ares I launch vehicle in this artist rendering.
(Image: © Lockheed Martin Corp.)

-- NASA administratorMike Griffin told an aerospace industry audience here Thursday that awardingcontracts for development of the Ares I rocket is the U.S. space agency's topprocurement priority for 2007.

NASA's majorplanned procurement activities for 2007 include awarding seperate separate contracts for the productionof the Ares I upper stage and avionics unit, building a satellite to replace the Landsat 7 Earth-imagingsatellite and ordering new Tracking and Data Relay Satellites to replenish theconstellation already on orbit.

But withCongress planning to fund most federal agencies at their 2006 levels again thisyear rather than passing new spending bills, NASA's challenge will be to keepthose procurements on track with a budget roughly $500 million less than it wasexpecting.

Asked whichprocurements NASA intends to pursue this year, Griffin said he hoped to do themall but that the highest priority would be to put the Ares I work undercontract.

"Until theCongress tells me otherwise I intend to do them all. My highest priority ofcourse is the Ares upper stage and the whole Ares vehicle," Griffin saidfollowing a speech at a breakfast here sponsored by the Space TransportationAssociation.

Griffin saidsetting the agency's priorities for the year would be done in consultation withthe White House and Congress, noting that the legislature has the final say onspending matters.

"I certainly don't get a veto, but I get a vote," he said. "To the extent to which I get avote, replacing our ability to put our own people into space by our own meansand to do so reliably and above all else safely is our number two priority atNASA," Griffin said, referring to the agency's efforts to field the Orion Crew Exploration Vehicle [image] and its Ares I rocket [image] no later than 2014 - four yearsafter the space shuttle is due to be retired. "Our numberone priority is to finish assembly of the international space station andcontinue to fly the shuttle safely."

"Everythingelse comes after that and I hope to do as much of all of the rest of ourpriorities as Congress allows with the budget that they pass," he said.