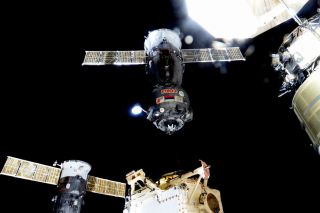 The Soyuz TMA-17M spacecraft is seen just after undocking from the International Space Station on Dec. 11.
(Image: © NASA/Scott Kelly via Twitter (@StationCDRKelly))

Three space station crewmembers made a rare nighttime return to Earth on Friday (Dec. 11), safely landing in Kazakhstan after 141 days in orbit.

Roscosmos cosmonaut Oleg Kononenko, NASA astronaut Kjell Lindgren and Kimiya Yui of JAXA (Japan Aerospace Exploration Agency) touched down at about 8:12 a.m. EST (1312 GMT or 7:12 p.m. local time) on board their Russian Soyuz TMA-17M spacecraft. The parachute and thruster-assisted landing put the trio down northeast of the Kazakh town of Dzhezkazgan about two hours after sunset.

The return marked only the sixth time that a Soyuz crew came home from the International Space Station at night, after more than 40 such landings. The returns are usually targeted for daylight to assist in recovery operations but a change in the launch schedule for an upcoming upgraded Russian cargo ship resulted in the post-sunset timing. [Watch: What It's Like to Ride on a Soyuz Spacecraft]

Despite the dark and frigid cold winter conditions, Russian recovery forces were on site to help Kononenko, Lindgren and Yui climb out of the Soyuz. Due to the weather though, the number of recovery helicopters were limited from 12 to four and the post-landing medical exams were deferred, in favor of promptly flying the crew to the nearest airport.

The crew began their trip home earlier on Friday morning at 4:49 a.m. EST (0949 GMT) with the undocking of Soyuz TMA-17M from the space station's Rassvet module. Their departure marked the official end of the orbiting outpost's Expedition 45 and the start of Expedition 46.

Remaining aboard the space station are NASA astronaut Scott Kelly and cosmonauts Mikhail Kornienko and Sergei Volkov. Kelly, who continues to serve as commander of the station, and Kornienko have less than 100 days remaining in their nearly year-long mission, a first on the International Space Station aimed at collecting data for longer astronaut missions to Mars.

Three more crewmates for Expedition 46 are scheduled to launch to the space station on Tuesday (Dec. 15). Russian cosmonaut Yuri Malenchenko, NASA astronaut Tim Kopra and European Space Agency (ESA) astronaut Tim Peake, Britain's first representative on board the space station, will fly to the orbiting laboratory aboard Soyuz TMA-19M for a six-month stay.

Kononenko, Lindgren and Yui arrived at the station on July 22. During their five months on board, the cosmonaut and two astronauts took part in conducting hundreds of science experiments, including growing the first vegetables — red romaine lettuce — to be eaten in space. They also helped to oversee the arrival of several cargo ships, including the fifth Japanese HTV and, just this week, the return to flight of Orbital ATK's Cygnus commercial resupply freighter.

Lindgren, together with Kelly, also ventured outside on two spacewalks totaling more than 15 hours to install a thermal cover over the Alpha Magnetic Spectrometer, a state of the art particle physics detector that has been attached to the station since 2011, and to restore a cooling system.

The timing of Kononenko, Lindgren and Yui's stay aboard the space station coincided with the 15 year anniversary of continuous crewed operations, which they helped mark.

The flight was the first for Lindgren and Yui, who now have logged 141 days off the Earth. It was the third mission for Kononenko, who has spent 533 days in orbit, ranking him 13th on the worldwide list of explorers for time in space.

Now safely back on Earth, the three TMA-17M crewmates are being flown to the airport in Dzhezkazgan. From there, Kononenko will depart for Star City, located near Moscow, while Lindgren and Yui board a NASA jet for the Johnson Space Center in Houston, where their families are awaiting their return.