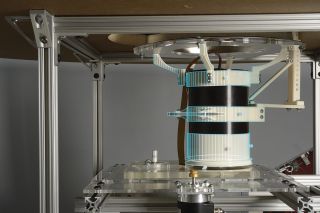 The contract is part of a broader effort to end reliance on a Russian rocket engine that powers United Launch Alliance's Atlas 5 rocket, which is used to launch a majority of U.S. national security satellites.

In 2014, Congress banned the future use of Russian engines as tensions with Moscow escalated over Russia's incursions into Ukraine. Congress also allocated funding to develop a U.S. alternative to the RD-180, but the Air Force hopes to fund work on a brand new rocket as part of its broader strategy to have competition in military launches. [3D-Printing and Space Travel: A Photo Gallery]

As an initial step, the Air Force is pursuing two aims: reducing the cost of rocket propulsion components and subsystems through the use of new materials and additive manufacturing; and enhancing its overall launch capabilities while lowering costs through improvements to existing rockets or by developing new ones.

The service has said it wants improvements that can be completed in less than two years.