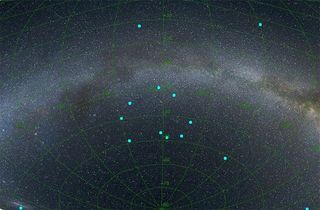 An image of the distribution of GRBs on the sky at a distance of 7 billion light years, centred on the newly discovered ring. The positions of the GRBs are marked by blue dots and the Milky Way is indicated for reference, running from left to right across the image.
(Image: © L. BALAZS)

Astronomers are constantly uncovering the "most distant," "most massive" or "most energetic" objects in our universe, but today, researchers have announced the discovery of a truly monstrous structure consisting of a ring of galaxies around 5 billion light-years across.

The galactic ring, which was revealed by 9 gamma-ray bursts (GRBs), is located 7 billion light-years away and spans an area of the sky more than 70 times the diameter of a full moon.

GRBs are thought to be detonated when a massive star reaches the end of its life. As the star implodes after running out of fuel, a black hole is formed and vast quantities of energy are blasted in collimated beams. Should Earth be aligned with these beams, an incredibly luminous signal can be observed and these beacons can be used to precisely gauge the distance to the GRB and the location of the galaxy that hosts it.

The GRBs are all cataloged in the Gamma Ray Burst Online Index, which precisely records each GRB distance and location, like pins on a cosmic map.

Astronomers believe these GRBs (and therefore the galaxies they inhabit) are somehow associated as all 9 are located at a similar distance from Earth. According to its discoverers, there's a 1-in-20,000 probability of the GRBs being in this distribution by chance — in other words, they are very likely associated with the same structure, a structure that, according to cosmological models, should not exist.

"If the ring represents a real spatial structure, then it has to be seen nearly face-on because of the small variations of GRB distances around the object's center," said Lajos Balazs, of Konkoly Observatory in Budapest, Hungary, and lead author of a paper published in the journal Monthly Notices of the Royal Astronomical Society. "The ring could though instead be a projection of a sphere, where the GRBs all occurred within a 250 million year period, a short timescale compared with the age of the universe."

But what could possibly be creating a sphere an unprescedented 5 billion light-years across?

According to most cosmological models, the universe should have a roughly uniform distribution of matter over the largest scales. This is known as the "Cosmological Principal" and observations by NASA's Wilkinson Microwave Anisotropy Probe (WMAP) and Europe's Planck space telescope, which both studied the distribution of the universe's ancient cosmic microwave background (CMB) radiation, seem to agree. However, other results have recently challenged this idea hinting that structures as large as 1.2 billion light-years may exist. But a growing list of discoveries in the cosmic abyss seem to contradict even the 1.2 billion light-year "limit."

The GRB ring is 5 times larger than the 1.2 billion light-year limit; a pretty huge anomaly by anyone's standard. And this latest discovery isn't even the biggest. In 2013, another distribution of GRBs revealed a 10 billion light-year structure. Other large structures also defy this theoretical limit.

So what could be causing this particular ring of GRBs? One idea focuses around the large-scale structure of the universe where clusters of galaxies amass together in a web-like structure, thought to be clumped around concentrations of dark matter. The "holes" in this web are referred to as voids — regions of the cosmos that are conspicuously near-empty of any matter. The largest voids are called, unsurprisingly, "super-voids."

But this new structure dwarfs all known super-voids.

"If we are right, this structure contradicts the current models of the universe. It was a huge surprise to find something this big — and we still don't quite understand how it came to exist at all," added Balazs.

So is the Cosmological Principal flawed? It's certainly looking that way.