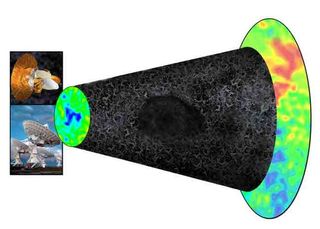 Illustration of the effect of matter on the cosmic microwave background (CMB). On the right, the CMB is released shortly after the Big Bang, with tiny ripples in temperature due to fluctuations in the early universe. As the radiation traverses the universe, it experiences slight perturbations. In the direction of the giant newly-discovered void, the WMAP satellite (top left) sees a cold spot, while the VLA (bottom left) sees fewer radio-emitting galaxies.
(Image: © Bill Saxton, NRAO/AUI/NSF, NASA)

The universe has a huge hole in it that dwarfs anything else of its kind. The discovery caught astronomers by surprise.

The hole is nearly a billion light-years across. It is not a black hole, which is a small sphere of densely packed matter. Rather, this one is mostly devoid of stars, gas and other normal matter, and it's also strangely empty of the mysterious "dark matter" that permeates the cosmos. Other space voids have been found before, but nothing on this scale.

Astronomers don't know why the hole is there.

"Not only has no one ever found a void this big, but we never even expected to find one this size," said researcher Lawrence Rudnick of the University of Minnesota.

"What we've found is not normal, based on either observational studies or on computer simulations of the large-scale evolution of the universe," said Williams, also of the University of Minnesota.

The finding will be detailed in the Astrophysical Journal.

The universe is populated with visible stars, gas and dust, but most of the matter in the universe is invisible. Scientists know something is there, because they can measure the gravitational effects of the so-called dark matter. Voids exist, but they are typically relatively small.

The gargantuan hole was found by examining observations made using the Very Large Array (VLA) radio telescope, funded by the National Science Foundation.

There is a "remarkable drop in the number of galaxies" in a region of sky in the constellation Eridanus, Rudnick said.

The region had been previously been dubbed the "WMAP Cold Spot," because it stood out in a map of the Cosmic Microwave Background (CMB) radiation made by NASA's Wilkinson Microwave Anisotopy Probe (WMAP) satellite. The CMB is an imprint of radiation left from the Big Bang, the theoretical beginning of the universe.

"Although our surprising results need independent confirmation, the slightly colder temperature of the CMB in this region appears to be caused by a huge hole devoid of nearly all matter roughly 6 to 10 billion light-years from Earth," Rudnick said.

Photons of the CMB gain a small amount of energy when they pass through normal regions of space with matter, the researchers explained. But when the CMB passes through a void, the photons lose energy, making the CMB from that part of the sky appear cooler.