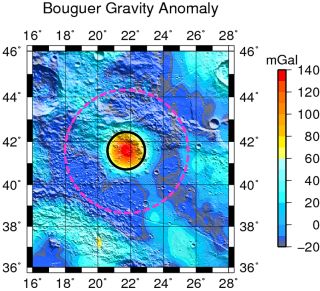 The Earhart crater, a previously unknown lunar crater, is outlined in the magenta dash circle. A team of researchers at Purdue University found the crater through an analysis of data from NASA’s Gravity Recovery and Interior Laboratory mission. The team provisionally named the crater Earhart, after the famous aviator Amelia Earhart. (
(Image: © Purdue University image/courtesy of Rohan Sood)

THE WOODLANDS, Texas – Scientists have named a crater on the moon for perhaps the most famous female aviator of all time: Amelia Earhart.

The massive crater, provisionally named Crater Earhart, was found thanks to to data from NASA's Gravity Recovery and Interior Laboratory mission (GRAIL). The crater is 124 miles wide (200 kilometers).

A team from Purdue University has been testing a new technique that sharpens the GRAIL observations of the moon to see smaller-scale features, like ridges and valleys. Diving into the data, they noticed an unusual circular feature, said Rohan Sood, a graduate student in Purdue's School of Aeronautics and Astronautics who worked on the project.

"The feature turned out to be the rim of an ancient crater, but it was so big we did not even recognize it as that at first," Sood said. "We were zoomed in on one little piece of it. We first tried to model it as a small crater, but we had to go bigger and bigger and bigger to match what the data was telling us."

The Purdue group plans to extend the search to the entire moon to reveal other buried craters and small-scale features beneath the surface.

That search could uncover underground tunnels formed by lava flows — called lava tubes – that have been proposed as a possible shelter for human habitats on the moon.

Crater Earhart is the provisional name as names of planetary features must be submitted and approved by the International Astronomical Union.

Notable alumni at Purdue include astronauts Neil Armstrong, Gus Grissom, and Eugene Cernan. Earhart was a Purdue career counselor and adviser to the Department of Aeronautics from 1935-1937.

Purdue is also home to the world's largest compilation of Earhart-related papers, memorabilia and artifacts.

The collection includes documents related to Earhart's 1932 solo Atlantic flight, her second and fatal attempt at a world flight in 1937, and items related to her time at Purdue.

Leonard David has been reporting on the space industry for more than five decades. He is former director of research for the National Commission on Space and is co-author of Buzz Aldrin's 2013 book "Mission to Mars – My Vision for Space Exploration," published by National Geographic, with a new updated paperback version to be released in May. Follow us @Spacedotcom, Facebook or Google+. Published on Space.com.