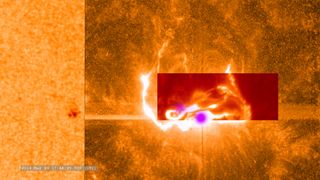 This combined image shows the March 29, 2014, X-class flare as seen through the eyes of different observatories.
(Image: © NASA)

Four spacecraft and one ground-based observatory recorded the eruption of a powerful X-class solar flare on March 29, making it the best-observed such event in history, NASA officials say.

Solar flares are powerful explosions with energies exceeding that of millions of hydrogen bombs. Never before has an X-class flare — the most energetic type — been observed by so many telescopes at once. A NASA video of the monster solar flare features several views of the March 29 sun storm.

The data from the unprecedented observation could help scientists better understand what catalyzes flares, and possibly predict when they will happen in the future — valuable information, considering that flares can cause radio blackouts on Earth, potentially disrupting aircraft, ship and military communication. [See More Photos of the March 29 Solar Flare (Gallery)]

"Some of the spacecraft observe the whole sun all the time, but three of the observatories had coordinated in advance to focus on a specific active region of the sun," Jonathan Cirtain, project scientist for Hinode at NASA's Marshall Space Flight Center in Huntsville, Ala., said in a statement.

"We need at least a day to program in observation time and the target — so it was extremely fortunate that we caught this X-class flare," Cirtain added.

CMEs, superheated clouds of plasma blasted into space at millions of miles per hour, can wreak havoc if they hit Earth, spawning geomagnetic storms that can potentially disrupt radio communications, GPS signals and power grids.

While countless devices monitor Earth's weather, only a handful of space observatories monitor the sun's activity, each of which has its own specialty. For instance, SDO can take images of the entire sun at once, while IRIS zeroes in on certain layers in the sun's lower atmosphere and takes much higher resolution images.

Scientists are now analyzing the data from the multi-telescope observation to understand how solar flares start and peak, NASA officials said.