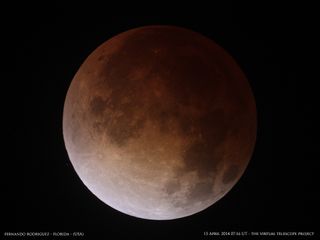 Photographer Fernando Rodriguez of the South Florida Amateur Astronomers Association captured this amazing view of the total lunar eclipse of April 15, 2014 during the totality phase at about 3:24 a.m. ET.
(Image: © Fernando Rodriguez via Virtual Telescope Project)

Editor's Update for 10 am ET: New photos of the first total lunar eclipse of 2014 have been added to our gallery, and we now have a great video of the "Blood Moon" you can watch. It occured overnight on April 14-15, and marked the beginning of an eclipse tetrad - four back-to-back total lunar eclipses. Scroll down for Space.com's complete coverage of the total lunar eclipse, which was visible from a wide region that includes most of North America and parts of South America. Gallery: Blood Moon Photos: Total Lunar Eclipse of April 15, 2014

Editor's Note: If you snap an amazing picture of the April 15 total lunar eclipse, you can send photos, comments and your name and location to managing editor Tariq Malik at spacephotos@space.com. Scroll down for more total lunar eclipse tetrad coverage:

Photos and other multimedia:

Moon Master: An Easy Quiz for Lunatics
The Moon: 10 Surprising Lunar Facts
How to Observe the Moon: A Skwatcher Guide (Infographic)
How Lunar Eclipses Work (Infographic)

First Total Lunar Eclipse of 2014: The Complete Skywatcher's Guide
No enthusiastic skywatcher misses a total eclipse of the moon, and if weather permits tonight, neither should you. Find out more about how to observe the moon during the amazing cosmic sight betwen Monday night and early Tuesday.

How Bright Will Tonight's Blood Moon Be?
The total lunar eclipse in the overnight hours tonight (April 14) and into the wee hours of tomorrow morning (April 15) will turn the moon blood red. But how bright will it be? Find out here.

Total Lunar Eclipse Weather: Forecast Bleak for Eastern US, Promising Elsewhere
The first total lunar eclipse of 2014 will occur overnight tonight (April 14-15) and be visible across the entire United States, weather permitting. Here's a weather forecast for the lunar eclipse.

Capturing the 2000 Lunar Eclipse from 'Hell on Ice'

Despite temperatures that reached 15 degrees below zero and frozen camera film that began to crack, Victor Rogus was able to capture the first total lunar eclipse over North America in the 21st century.

Monday's Big Space Day: See a Rocket Launch, Mars and Total Lunar Eclipse Online
Monday is a dream come true for space enthusiasts, with a total lunar eclipse, a great view of Mars and a private cargo mission launch on the docket.

Mars Makes Closest Approach to Earth in 6 Years Monday Ahead of Lunar Eclipse
On Monday (April 14), Mars will make its closest approach to Earth in six years, just ahead of a total eclipse of the moon. Here's how to see both events.

Tax Day Total Lunar Eclipse Kicks Off Blood Moon 'Tetrad'
Fancy a lunar eclipse? Skywatchers in the United States have the chance to see four total eclipses in the next 18 months, beginning with a "blood moon" on Tuesday (April 15), just in time for Tax Day.

How to Observe the Moon: Tips to See 2014's First Lunar Eclipse
In just a few days, the first total eclipse of the moon to be visible across the whole of North America since December of 2010 will occur. But to make the most of your moon-watching experience, there are some tips to keep in mind.

Four Blood Moons: Total Lunar Eclipse Series Not a Sign of Apocalypse
The total lunar eclipse of April 15 will kick off a somewhat rare "tetrad" (a group of four) lunar eclipses in 2014 and 2015. But it won't bring the apocalypse as some fear.

Lights Out: Total Lunar Eclipse Leaves NASA Moon Probe in the Dark
Next week's total lunar eclipse may thrill millions of skywatchers, but it poses a bit of a challenge for a sharp-eyed NASA moon probe.

Total Lunar Eclipse Will Darken the Moon Next Week
Stargazers and lunar fans in the Western Hemisphere will have ringside seats for a total eclipse of the moon during the overnight hours of April 14 and 15. This spectacle of celestial shadows will be the first of two total lunar eclipses in 2014 that will be visible from North America.

Total Lunar Eclipse and Solar 'Ring of Fire' Top April's Stargazing Events
Stargazers have a lot to look forward to this month. The best celestial events in April include eclipses of the sun and moon, a meteor shower and good opportunities to see Vesta and Ceres, the two biggest space rocks in the main asteroid belt between Mars and Jupiter.

Full Moon Calendar 2014 | Next Full Moon
Moon Phases Calendar
How Far is the Moon?
How Big is the Moon?
Earth's Moon: Formation, Composition and Orbit
Does the Moon Rotate?
Atmosphere of the Moon