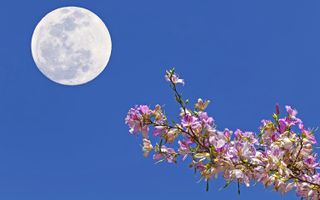 Often, a Blue Moon refers to a second full moon in a month. As it happens, that usage is relatively recent, according to Donald Olson, Richard Fienberg and Roger Sinnott, writing in Sky & Telescope.

Per the authors, it appears that the more recent usage (two full moons in a month) resulted from an error in an article in that same publication, in 1946.

As for viewing the moon, observers in New York City will see moonrise at about 8 p.m. local time on May 18, according to the U.S. Naval Observatory. The moon will be in the constellation Libra. The sun will set at 8:09 p.m. on May 18, so for a short time, the full moon and the sun will both be in the sky. (Similarly, early risers in New York on May 18 will see the sun rise at 5:36 a.m. local time while the moon will set at 5:42 a.m.)

This phenomenon will occur only for observers at relatively high northern latitudes; in Miami, for example, the sun will rise at 6:34 a.m. EDT on May 18 while the moon will set at 6:30 a.m. One reason for this is that the difference in day length between seasons gets larger as one moves away from the equator; in the tropics, day length doesn't change much over the course of the year.

A full moon occurs when the moon is exactly on the opposite side of the Earth from the sun. The moon reflects the sun's light to Earth, unless the natural satellite's orbit carries it within the Earth's shadow, creating a lunar eclipse. (The next lunar eclipse will occur on July 16 and will not be visible from the Americas.)

Through binoculars or a small telescope, the full moon appears very bright, so much so that the glare can even require filters. Unlike observing the sun (which one should never do without specialized equipment), there is no danger to one's eyes in viewing the full moon. But details can be harder to see than when the moon is a crescent or in its quarter phases ("half" moons).

The problem is contrast; a full moon means we are seeing the surface at lunar noontime (if one were standing on the moon, the sun would be directly overhead). There are no shadows at all toward the center of the disk and few of them even toward the edges.

Moon filters can make some features stand out, or one can simply wait a few days after the full moon or observe a few days before it. At those times, shadows make spotting the moon's surface features easier.

On the same day as the full moon, two planets will pass close by each other, but the observing will be better as one goes south. Venus and Uranus will be in conjunction, sharing the same celestial longitude, and pass within about a degree of each other, according to skywatching site In-The-Sky.org. Both planets will be in the constellation Aries.

From New York City, the pair will be only a few degrees above the horizon; by sunrise, Venus will get to an altitude of only 9 degrees, according to heavens-above.com calculations. Observers in Miami will see Venus get a little higher, 11.6 degrees by 6:15 a.m. EDT. The situation will be much better in the Southern Hemisphere; from Rio de Janeiro, Venus will rise to about 18.7 degrees by 6 a.m. local time, about 20 minutes before sunrise.

While Venus is quite visible to the naked eye, Uranus is not; it is about the limit of visibility for a person with good eyesight observing a dark sky. So, you'll likely need a pair of binoculars to catch the two worlds together.

The moon will have its share of May conjunctions in the days after it reaches full phase. On May 20, the moon will pass by Jupiter, and on May 22, Earth's satellite will swing by Saturn.

The Jupiter conjunction will occur at 12:54 p.m. EDT, but the two bodies will appear close to each other when the moon rises, at 10:09 p.m. EDT, shortly after Jupiter does at about 9:50 p.m. Both will be at their highest by around 2 a.m. the morning of May 21. The two will be in the constellation Ophiuchus.

The term Flower Moon for the full moon of May comes from the blooms that appear in North America around that time; many Algonquin-speaking peoples in the northeastern part of the continent, such as the Ojibwe (or Anishinaabe), called this moon something similar, according to the Ontario Native Literacy Coalition. The Cree called it the Frog Moon, as May is when frogs tend to become active. Both Anishinaabe and Cree traditions reflect the environment in northeastern North America, where the two peoples live.

The May full moon will also mark the halfway point of the month of Ramadan, when observant Muslims fast from sunrise to sunset. In the Islamic and Jewish calendars, months begin and end with new moons, so Ramadan will end on June 4 this year.

In the Southern Hemisphere, where fall is now coming to a close, the Māori described the lunar month of Pipiri, which occurs from May to June, this way: "All things on Earth are contracted because of the cold," according to the Encyclopedia of New Zealand.

Editor's Note: If you capture an amazing photo of the Flower Moon and want to share it with Space.com for a story or gallery, please send images and comments in to managing editor Tariq Malik at spacephotos@space.com.