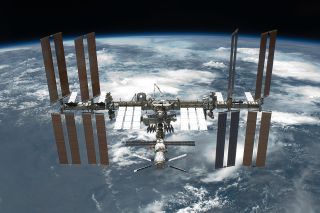 The International Space Station as seen from the U.S. space shuttle Endeavour following undocking on May 29, 2011.
(Image: © NASA)

Did the Stuxnet cyberweapon infect the International Space Station?

Almost certainly not, but that hasn't stopped a lot of media outlets from saying so in bold headlines.

But Kaspersky never said Stuxnet had infected the International Space Station (ISS). Rather, he offered two separate and unrelated anecdotes.

The first was one about non-specific malware being carried onboard the ISS by astronauts. The other was about Stuxnet infecting a Russian nuclear-facility network. (Kaspersky offered no proof for either allegation.)

This is at least partly true. In 2008, a Windows worm designed to steal online-game login credentials was found on laptops aboard the ISS.

The space news site SpaceRef quoted NASA as saying, "Virus was never a threat to any of the computers used for cmd and cntl [command and control] and no adverse effect on ISS Ops [operations]."

It's not clear how the malware got on the laptops, but the BBC quoted NASA as saying "it was not the first time computer viruses had travelled into space."

Since then, most, if not all, of the laptops used by astronauts aboard the ISS have been switched to the open-source Linux operating system, which many of the ISS' built-in systems already ran. Linux has far fewer malware issues than Windows.

Regarding Stuxnet infecting the Russian nuclear network, Kaspersky made that allegation during a long response to an audience question about governmental attitudes toward industrial-control system vulnerabilities.

"Departments which are responsible for offense, they see it as opportunity," Kaspersky said. "They don't understand that in cyberspace, everything you do is a boomerang. It will get back to you."

"Stuxnet — which was, well, I don't know, but, if you believe American media, it was developed by American and Israel secret services— Stuxnet, against Iran, to damage Iranian nuclear power program," he continued.

"How many computers, how many enterprises, were hit by Stuxnet in United States? Do you know?" Kaspersky asked. "I don't know, but many. Last year, for example, Chevron, they [admitted] that they were badly infected by Stuxnet."

"So, unfortunately, these people who are responsible for offensive technologies," he concluded, "they recognize cyberweapons as an opportunity."

The truth about Stuxnet

It's quite possible that Stuxnet did infect an internal network at a Russian nuclear plant. The Stuxnet worm was designed to infect Windows computers controlling Siemens System 7 programmable logic controllers at nuclear facilities.

However, it's very unlikely that Stuxnet did any damage at the Russian plant. The worm was precisely calibrated to attack one specific facility: Iran's Natanz uranium-processing plant.

Kaspersky's sensational-sounding comments, combined with reporters hungry for news about evil hackers and cyberwar, yet not well versed on the background details, meant that many media outlets got what Kaspersky said flat-out wrong.

At least one of them eventually got it right.

"This article originally said the ISS was infected with Stuxnet," said the Atlantic in a correction. "Upon further review of Kaspersky's statements, that's not the case. We're sorry for the confusion."