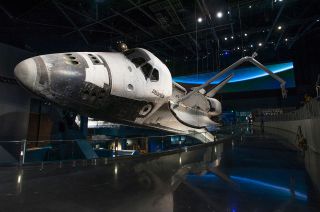 CAPE CANAVERAL, Fla. — Upon first seeing Atlantis, a space shuttle that's been to space and back 33 times, it’s not uncommon to gasp — or cry. The retired orbiter is displayed at an angle, with its cargo bay doors open and robotic arm outstretched, and it seems to be just barely out of reach. The sight is arresting, to say the least.

"I'm not going to lie — I shed a tear," said Jess Johnting of Boca Raton, Fla., an avid space fan who said she'd long been looking forward to the opening of the show. [See photos of the new Space Shuttle Atlantis exhibit]

The grand opening was attended by a massive crowd and more than 40 astronauts representing all 33 of Atlantis' missions to space. It "launched" with a bang as sparks and smoke appeared to furl out of the humongous life-size fuel tank and solid rocket boosters guarding the entrance to the Atlantis building.

Visitors then proceeded inside, where a giant screen shows a film on the origin and history of the space shuttle program.

"I can't believe how long it took to build," said Brittney Frey, age 13, of McDonough, Ga.

After the video, visitors come face to face with Atlantis herself.

"It was breathtaking. It blew my mind," said John Hurley of West Palm Beach, Fla.

The sight of the magnificent shuttle grounded for good, and beginning life as a museum exhibit, was also hard for some. "I have mixed emotions. It's kind of bittersweet," Jessica Hurley said.

Nonetheless, the Hurleys said the presentation here did Atlantis justice, and they planned to come back "over and over again," she added.

Atlantis dominates the center of a multistory building that allows views of the orbiter from many angles. The Kennedy Space Center Visitor Complex is unique in displaying the vehicle as if it were mid-mission, on orbit. The other retired space shuttles, at Washington, D.C.'s Smithsonian National Air and Space Museum, Los Angeles' California Science Center, and New York's Intrepid Sea, Air and Space Museum, all present their orbiters in horizontal position.

"The size of it — what you see on TV doesn't compare to real life," said Ricky Rawls of Crystal River, Fla. "It's an awesome flying machine."

Many said Atlantis was larger than they expected.

"It's just amazing, incredible," said Mike Kitslaar of Orlando, Fla., who'd been following the preparation of Atlantis for display via the KSC Visitor Complex's online webcam.

Organizers of the exhibition said their prime hope for the show is to inspire the next generation of scientists, astronauts and explorers. Judging by the awed reactions of many kids Saturday, they may be well on their way toward that goal.

"It was really cool," said Markis Cheng, age 10, of Arcadia, Calif., who said he'd like to go to space someday. "I've always wanted to see what happens when you float."