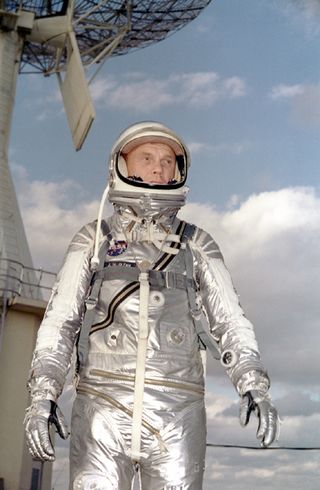 In this historical photo from the U.S. space agency, Astronaut John H. Glenn Jr. in his silver Mercury spacesuit during pre- flight training activities at Cape Canaveral. On February 20, 1962 Glenn lifted off into space aboard his Mercury Atlas (MA-6) rocket and became the first American to orbit the Earth. After orbiting the Earth 3 times, Friendship 7 landed in the Atlantic Ocean 4 hours, 55 minutes and 23 seconds later, just East of Grand Turk Island in the Bahamas. Glenn and his capsule were recovered by the Navy Destroyer Noa, 21 minutes after splashdown.