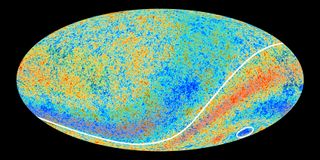 Two Cosmic Microwave Background anomalies hinted at by the Planck observatory's predecessor, NASA's WMAP, are confirmed in new high-precision data revealed on March 21, 2013. In this image, the two anomalous regions have been enhanced with red and blue shading to make them more clearly visible.
(Image: © ESA and the Planck Collaboration)

Europe's Planck spacecraft has revealed the most detailed map yet of the earliest light in the universe, which reveals some tantalizing anomalies that could point toward new physics.

The new map tracks small temperature variations in the glow pervading space called the cosmic microwave background (CMB). This light was released just 380,000 years after the Big Bang, and contains a record of how our universe came to be.

By and large, the new data from Planck agree with cosmologists' leading ideas about how the universe formed. The theory of inflation suggests that after the Big Bang, the universe ballooned rapidly from its tiny, hot state, doubling in size every 10^-35 seconds (a decimal point followed by 34 zeroes and a one).

But where the basic models of inflation say this expansion should have happened uniformly in all directions, the new Planck results suggest that might not have been the case. [Universe's CMB Radiation Explained (Infographic)]

"One of the features of inflation is it says there should be no preferred direction — everywhere in the universe should be more or less the same," astrophysicist Marc Kamionkowski of Johns Hopkins University said today (March 21) during a NASA press call. "But when you look at the amplitudes, even by eye you can tell that one side of the universe looks different from the other side."

That is to say, the temperature variations in the CMB appear to be sized and spaced differently when Planck looks in one direction, than when it looks in the other.

There are other anomalies as well. The variations don't appear to behave the same on large scales as they do on small scales, and there are some particularly large features, such as a hefty cold spot, that were not predicted by basic inflation models.

Ultimately, the data show "some features that are surprising and very, very intriguing," said Charles Lawrence, U.S. Planck project scientist at NASA's Jet Propulsion Laboratory in Pasadena, Calif.
"Hopefully in the process of understanding those features better we will be able to glimpse answers to some of our deepest questions."

Indeed, the map's deviations from what was predicted are not cause for disappointment among scientists, but rather exhilaration. They could even lead toward unraveling the mysteries of dark matter and dark energy, two perplexing constituents of the universe that have yet to be explained by mainstream theories.

For example, the new CMB measurements produce a new estimate for the age and expansion rate of the universe, which the Planck scientists calculate to be 13.8 billion years old, and 41.73 miles (67.15 kilometers) per second per megaparsec, respectively. The expansion rate is also known as the Hubble constant, and the new estimate is significantly lower than the values derived through other astronomical observations.

"This is one of the most exciting parts of the data, is this apparent tension between these different ways to estimate how rapidly the universe is expanding," said Martin White, U.S. Planck scientist at the University of California, Berkeley. "The hope would be that this is actually pointing toward some deficiency in the models or some extra physics."

The expansion rate of the universe is deeply connected to the idea of dark energy, which is the name scientists have given to whatever is causing the universe's expansion to accelerate. The finding could point toward a new direction of thinking about dark energy, including the possibility that it has changed over time.

"If it was different than the simplest models, if the amount of dark energy was somehow increasing with time in a given volume of space, then that would alleviate some of the tension," White said, and added, "that's a pretty radical thing to propose."

And getting to the bottom of the other anomalies in the Planck data may point to even more radical conclusions, such as the idea of multiple universes and bubble universes created by areas of the primordial universe that inflated at different rates.

It turns out that collisions between these bubbles of space-time are one possible explanation for why inflation might not have proceeded uniformly in all directions.

"The fact that these anomalies not only exist but exist on the very largest scales gives us some hope that we may be actually able to say something in the future about a multiverse," Kamionkowski said.