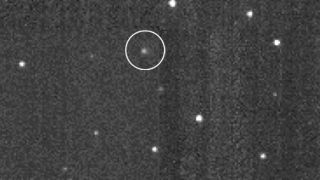 Astronomers are already getting set for the arrival of Comet ISON, which may become one of the brightest comets ever seen when it cruises through the inner solar system this fall.

NASA has brought together a small team of experts to organize an observing campaign for Comet ISON, which could potentially shine as brightly as the moon when it makes its closest pass by the sun in late November if the most optimistic scenarios play out.

Coordinating the efforts of observatories on the ground and in space should help wring as much quality science as possible out of the comet's solar flyby, Comet ISON Observing Campaign (CIOC) officials said.

"It's a rare opportunity that we've got such a long heads-up time, so we actually have time to organize a campaign like this," said Karl Battams, a scientist at the U.S. Naval Research Lab in Washington and a member of the eight-person CIOC Team. "There's a lot of new science that we could get from this." [Photos of Comet ISON in Night Sky]

ISON is a sungrazing comet, meaning its long, looping path through space takes it extremely close to our star. Indeed, ISON is forecast to zoom just 680,000 miles (1.1 million kilometers) above the solar surface on its closest approach, which will take place on Nov. 28.

Comet ISON could put on a spectacular show around this time, experts say, potentially glowing so brightly that it's visible in the daytime sky. (The comet poses no impact threat to Earth.)

Skywatchers aren't the only people looking forward to the icy wanderer's solar encounter. Astronomers are excited as well, for ISON's flyby could give them a rare window into comet composition.

"Sungrazers experience the most intense thermal and gravitational stresses of any comet. There's a lot of sublimation of material that doesn't normally sublimate," Battams told SPACE.com. "Once [ISON] gets really close in to the sun, then we could start to see some of the composition that you wouldn't normally get."

So Battams and his colleagues have contacted major ground-based observatories, raising awareness of the comet's flyby and encouraging them to solicit ISON-observing proposals. The response has been warm, with telescope operators typically voicing enthusiasm about the campaign, Battams said.

The CIOC crew has also reached out to some spacecraft mission teams, asking them to consider taking a look at the comet at some point. And a number of them are already on board.

"Observing campaigns are planned by the SOHO, STEREO and SDO solar missions; by Spitzer, Chandra and Hubble space telescopes; and by the Deep Impact, JUNO, Mercury MESSENGER, Mars Odyssey and Mars Reconnaisance Orbiter missions," the CIOC website states. "Other missions at or on Mars are looking into observing ISON, as are a handful of other NASA Planetary missions. We welcome and encourage our international partners to contact us and join in the fun!"

In fact, Deep Impact has already begun its ISON work. The NASA probe, which has also studied several other comets in deep space, snapped its first photos of Comet ISON in January.

There's no guarantee that ISON will live up to the hype; it may fall apart before even making its closest solar approach. Comets are notoriously unpredictable and sometimes fizzle out despite great expectations, as Comet Kahoutek did in 1973.

The wild-card factor with ISON is especially high, Battams said, since this is apparently the comet's first trip through the inner solar system from the distant, icy Oort cloud. Astronomers and skywatchers probably won't get a real sense of how the comet is going to behave until early August, when water ice should start sublimating in earnest, he added.

But the CIOC Team is proceeding as if Comet ISON will put on a dazzling show, because that's the scientifically prudent thing to do.

"We have to go forward with optimism and prepare for something really special, something really spectacular, and hope that it happens," Battams said. "If it does, we're absolutely going to be in place to take an unprecedented and comprehensive set of observations of the comet."