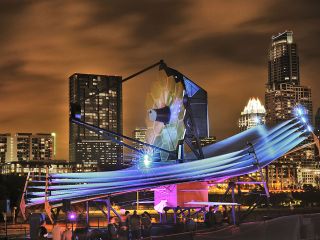 A full-scale model of the James Webb Space Telescope model was on display from March 8-10 at the South by Southwest Interactive Festival in Austin, Texas.
(Image: © NASA/Chris Gunn)

With their eyes turned up at the Texas night sky, NASA and 526 space fans have set a new Guinness World Record for the largest outdoor astronomy lesson in Austin.

The huge group gathered on the lawn of the Long Center for the Performing Arts at the South by Southwest (SXSW) festival on March 10 to learn about how astronomers use light and color to understand cosmic objects, from the moon to distant galaxies.

"Astronomy awakens the natural curiosity and awe in all of us," Frank Summers, an astrophysicist from the Space Telescope Science Institute (STScI) in Baltimore, said in a statement. "Many people think that astronomy and physics is only complicated math equations. They don't recognize how natural it is and how much they already know."

Summers and Dan McCallister, an education specialist at STScI, used colored filter glasses to show how light can be broken down into its different wavelengths. They explained how certain wavelengths are selected for specific studies of an astronomical object. In the background of the lesson was a full-scale model of NASA's next giant space observatory, the James Webb Space Telescope, which is the size of a tennis court and as tall as a four-story building. The real space observatory is slated to launch in 2018.

Sunday's event was organized by NASA, STScI and Northrop Grumman, which are all involved in the Webb Telescope mission. It was intended to highlight how amazing space telescope pictures help answer big questions about the universe.

"Astronomy tries to answer the questions that everyone wonders about like, 'how did we get here?'" Alberto Conti, an astrophysicist and Webb Telescope innovation scientist at STScI, who was also at SXSW, added in a statement. "Astronomy showcases the physical laws of nature. It shows all of the processes. You can learn a lot about physics and nature by studying it."

The record for the largest astronomy lesson was previously held by Mexico, which hosted a similar event including 458 participants, organized by Juarez Competitiva, on Oct. 14, 2011.