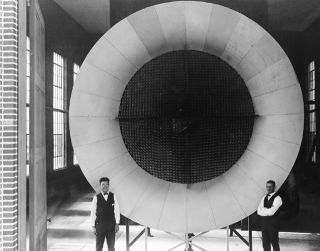 In this historical photo from the U.S. space agency, Langley's first wind tunnel is pictured. The honeycombed, screened center of this open-circuit air intake for the wind tunnel insured a steady, nonturbulent flow of air. Two mechanics pose near the entrance end of the actual tunnel, where air was pulled into the test section through a honeycomb arrangement to smoothen the flow.