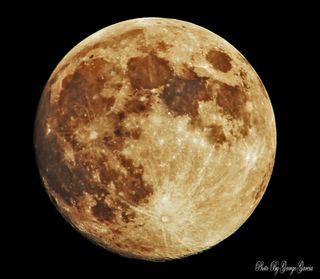 Glass beads within moon rocks suggest that water seen on the lunar surface originates from the solar wind, researchers say.

These findings suggest that other airless bodies in the solar system may also possess water on their surfaces, investigators added.

Arguments raged for years as to whether the moon harbored frozen water or not. Recent findings confirmed that water does wet the moon, although its surface remains drier than any desert on Earth.

"With the cost of $25,000 for taking one pint of water to the moon, it is essential that we develop processes of producing water from the materials on the moon," said the study's lead author, Yang Liu, at the University of Tennessee at Knoxville. "This is paramount to human settlement of the moon in the near future." [Gallery: Our Changing Moon]

"This water would be of most value as rocket fuel — liquid hydrogen and liquid oxygen," Liu added. "Until the recent discovery of water in and on the moon, this was going to be a very energy-intensive endeavor to separate these elements from the lunar rocks and soil. Now we have ready sources of water that can be consumed by plants and humans, but also broken up into its constituent elements — oxygen and hydrogen. Thus, we could use the moon as a jump-board for missions to Mars and beyond."

It remained uncertain where all of this water might come from, although some apparently came from ice-rich comets. To find out more, scientists analyzed lunar surface dust, or regolith, that astronauts on the Apollo missions brought from the moon.

Lunar regolith is created by meteoroids and charged particles constantly bombarding lunar rock. The researchers focused on grains of glass in the samples that were created in the heat of countless micrometeoroid impacts on the moon. They reasoned this glass might have captured any water in the regolith before it cooled and solidified.

The investigators found that a large percentage of this glass contained traces of wetness — between 200 and 300 parts per million of water and the molecule hydroxyl, which is much like water, save that each of its molecules possesses just one hydrogen atom, not two.

To figure out where this water and hydroxyl originated from, the scientists looked at their hydrogen components. Hydrogen atoms come in a variety of isotopes, each with a different number of neutrons in their nuclei — regular hydrogen has no neutrons, while the isotope known as deuterium has one in each atomic nucleus.

The sun is naturally low in deuterium because its nuclear activity rapidly consumes the isotope. All other objects in the solar system possess relatively high levels of it, remnants of deuterium that existed in the nebula of gas and dust that gave birth to the solar system.

The researchers found that the water and hydroxyl seen in the lunar glass were both low in deuterium. This suggests their hydrogen came from the sun, probably blasted onto the moon via winds of charged particles from the sun, which continuously streams from the sun at a rate of 2.2 billion pounds (1 billion kilograms) per second. The moon, lacking a significant atmosphere or magnetic field, slowly captures all the particles striking it. The hydrogen particles then bonded with oxygen bound in rocks on the lunar surface.

"The origin of surface water on the moon was unclear," Liu said. "We provide robust evidence for a solar wind origin. This finding emphasizes the potential in finding such water on the surface of other similar airless bodies, such as Eros, Deimos, Vesta."

The scientists detailed their findings online Sunday (Oct. 14) in the journal Nature Geoscience.