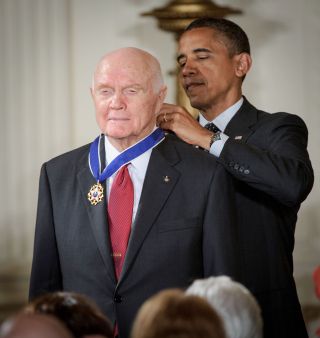 John Glenn, the first U.S. astronaut to orbit the Earth, was honored by President Barack Obama with the Presidential Medal of Freedom during a ceremony held at the White House on Tuesday (May 29).

Glenn was present at the event with this year's 12 other medal recipients, including influential musician Bob Dylan, former Secretary of State Madeline Albright, and Juliette Gordon Low, who founded the Girl Scouts in 1912.

"This is the highest civilian honor this country can bestow, which is ironic because nobody sets out to win it," Obama said, addressing what he described as a "packed house." "No one picks up a guitar, or fights a disease, or starts a movement thinking, 'You know what? If I keep this up, in 2012 I could get a medal in the White House from a guy named Barack Obama.'"

"But that is precisely what makes this award so special," the president said.

Since 1963, the Presidential Medal of Freedom has been awarded to individuals for "meritorious contributions to the security or national interests of the United States, to world peace, or to cultural or other significant public or private endeavors," according to the White House. [Photos: John Glenn's Historic Spaceflights]

Glenn, 90, is a former Marine Corps Colonel, NASA astronaut, and Senator. On Feb. 20, 1962, he became the third U.S. astronaut in space and the first to circle the planet.

"On the morning that John Glenn blasted off into space, America stood still," Obama said before presenting Glenn with the Medal of Freedom. "For a half an hour, the phone stopped ringing at Chicago police headquarters. New York subway drivers offered a play-by-play account over the loud speakers. President Kennedy interrupted a breakfast with congressional leaders to join 100 million TV viewers to hear the famous words 'Godspeed John Glenn.'"

Nearly four decades after his first mission and a quarter century after being elected to Congress, Glenn lifted off on board the space shuttle to become the oldest person to fly in space.

"The first American to orbit the Earth, John Glenn became a hero in every sense of the word but he didn't stop there serving his country. As a senator, he found new ways to make a difference. And on his second trip into space at age 77, he defied the odds once again," Obama said.

"He reminds everybody don't tell him he's lived a historic life," the president continued. "He says 'are living,' don't put it into the past tense because he still has a lot of stuff going on."

The honor came three months after NASA and the nation celebrated the 50th anniversary of Glenn's Mercury-Atlas 6 mission aboard his Friendship 7 spacecraft.

"NASA sends its warmest congratulations to Senator John Glenn," NASA's chief Charles Bolden said in a statement about the Presidential Medal of Freedom. "Both of John's historic missions to space personified America's dreams and what we believed we could be."

In addition to referencing Glenn's spaceflight experiences, the award was also in recognition for the Senator's political achievements. Glenn was an architect and sponsored the 1978 Nonproliferation Act and served as chairman of the Senate Government Affairs committee from 1987 to 1995.

Glenn retired from Congress in 1999 after representing his home state of Ohio for 25 years.

With this honor, Glenn joins the small group of astronauts who've been awarded the Presidential Medal of Freedom.

The crew the first manned moon landing, Neil Armstrong, Buzz Aldrin and Michael Collins, were bestowed the honor soon after their return to Earth in 1969. A year later, the Apollo 13 crew, Jim Lovell, Fred Haise and Jack Swigert, as well as Apollo 14 lunar module pilot Ed Mitchell, were similarly honored.

Among his many earlier awards, Glenn was presented with the Congressional Space Medal of Honor in 1978. NASA's highest award, it was given to Glenn by President Jimmy Carter.

Last November, Glenn received the Congressional Gold Medal, which with the Presidential Medal of Freedom is considered the highest civilian honors. Together with the Apollo 11 crew, Glenn was among the first astronauts to be awarded the Gold Medal.