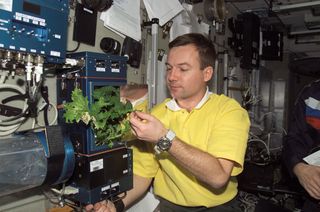 Soyuz 5 Commander Sergei Zalyotin examines plants grown in the Lada growth chamber located in the Zvezda Service Module on the International Space Station. Since its inception, the Lada chamber has been used to repeatedly harvest fast-growing plants such as peas, mizuna (a Russian leafy vegetable), wheat, peppers and rice. Image
(Image: © NASA)

Gail Bingham remembers vividly the day in 1996 when a team at the Institute for Biomedical Problems (IBMP) in Moscow lost 100 of his crew members in the institute's international space station simulation chamber. This loss was felt by few, but to the three-member team participating in the six-month ground isolation study, those 100 stalks of wheat were part of the crew.

"When their mission was over, I remember the crew commander came up to me and said how important our experiment was to him," said Bingham, the chief scientist at the Space Dynamics Laboratory at Utah State University in North Logan.

Bingham was running a study with colleagues at IBMP to harvest 100 wheat stalks in a growth chamber on the simulator, just one of many experiments in Bingham's ongoing study of vegetation growth in space, studies he has conducted on the ground and in space at two different space stations.

In the ground simulation, the Russian crew tended to the plants on the side when not performing their regular duties during the half-year they spent in a simulated space station flight. The growth experiment turned out to be a great success, but one that proved bittersweet for the crew.

"'When the plants started to come up, it was more like we had 103 crew members instead of three,'" Bingham recalled the crew commander saying. "When it came time to harvest the wheat, the crew said it was the hardest thing they had to do during their whole flight because they viewed it as killing their crew members," Bingham said.

Bingham has been working in this field since 1992. He originally pitched the idea of growing plants in space to NASA in 1985 - a proposal that was approved but never funded, Bingham said.

"In our frustrations we turned outside the United States and got an invitation from the Russians," he said. In 1994 Bingham and his team launched their first study with the Russians and "have been working with them ever since," he said.

While the plants have provided crews at Russia's Mir space station and at the international space station a periodic break from their freeze-dried food packs, the task of attending to the growth chambers results in a much more important psychological benefit that may prove vital in long-term manned spaceflight, such as that observed in the 1996 simulation.

"It's awful nice to have something growing up there besides the fungus under your arm pit," Bingham said. "You have to give them something different from their work for relaxation. Once it gets to be two or three weeks in space, it's hard to psychologically sustain that high-level flight."

The first growth chambers, called Svet, were designed for the Mir space station, but when the Russian station was deorbited into the ocean, Bingham said his team decided to build something new for the Russian segment of the international space station. The undertaking then transformed into a student project at the Space Dynamics Laboratory in collaboration with developers at IBMP.

In September 2002 the resulting growth chamber called Lada (named for the Russian goddess of spring) was launched aboard a Russian Soyuz rocket to the international space station.

Since its inception, Lada has been used to repeatedly harvest fast-growing plants such as peas, mizuna (a Russian leafy vegetable), wheat, peppers and rice with "no detrimental effects," Bingham said.

"The key to being able to repeatedly grow plants in space is to know how to develop the hardware so the plants think they are in an environment where they originally developed," Bingham said.

The Lada system, composed of two growth chambers, a control module and two water reservoirs, allows for the growth of plants without gravity, which on Earth pushes water into the soil and also opens up air pockets to allow oxygen to reach the roots. Two growth chambers require about 90 watts to operate on the station.

Instead of conventional soil, a granulated mixture with time-released fertilizer is used as the rooting substrate. Fans in the growth chambers resemble Earth-like convections, which help to force oxygen through the water clumps blocking the openings to reach the roots, Bingham said. The oxygen-water balance in the root zone is balanced through sensors.

Station crew members typically devote about an hour a week to Lada experiments, Bingham said, and none of them seem to mind working on a project that could provide important mental health benefits in long-term space missions.

"The longer you go, the longer the mission, the more important this is," said Charlie Barnes, head of the Biomass Production Program at NASA. "From what we know about isolation studies and anecdotal experiences, it seems the stress from isolation might be a factor we have to worry about when going to Mars. Having fresh plants would help ameliorate that stress."

Barnes' division provides Bingham with several hundred-thousand dollars a year in funding, but he said NASA support for this type of research has been limited as NASA Administrator Mike Griffin directs funds to develop a new crew exploration vehicle by 2010.

While Barnes admitted funding for these types of research programs has been "trimmed back" by NASA, the agency has been working on the development of an external chamber where plants could grow under low atmospheric pressure conditions like those on the surface of Mars. NASA also is looking to incorporate plants into other aspects of a spacecraft's systems, such as air revitalization and water recovery, he said.

"We're talking about a very small fraction of the crew diet but a larger fraction of air revitalization and water recovery," Barnes said.