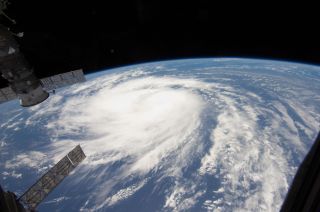 Katia was a tropical storm gathering energy over the Atlantic Ocean when one of the Expedition 28 crew took this photo on Aug. 31, 2011, from aboard the International Space Station. Two Russian spacecraft -- a Progress and a Soyuz --can be seen parked at the orbital outpost on the left side of the frame.
(Image: © NASA)

Hurricane Katia can't seem to decide what it wants to be — after becoming a hurricane on Wednesday night (Aug. 31) it then dropped back down to tropical storm strength, but has since climbed back up to Category 1 hurricane status.

The Expedition 28 crew aboard the International Space Station took this photo of Katia when it was still a burgeoning tropical storm earlier in the week as it churned over the Atlantic Ocean. [Astronaut's space photo of Katia]

Astronauts aboard the orbiting laboratory caught several glimpses of Hurricane Irene from space and remarked on its awesome size.

Katia has winds of 75 mph (120 kph), just above the threshold for hurricane status. The storm is expected to strengthen in the next 48 hours and could become a major hurricane (Category 3 or higher on the Saffir-Simpson scale of hurricane strength) by the middle of next week.

Katia is still far out at sea -- some 705 miles (1,135 kilometers) east of the northern Leeward Islands -- so it is too early to tell yet whether it will pose a threat the U.S. East Coast, which is still recovering from the damage wrought by Irene.

August through October are the peak months of the Atlantic hurricane season.

Forecasters and Gulf Coast residents are also keeping an eye on Tropical Depression 13, which is poised to dump up to 20 inches (50 centimeters) of rain in some areas along the drought-plagued southern states.