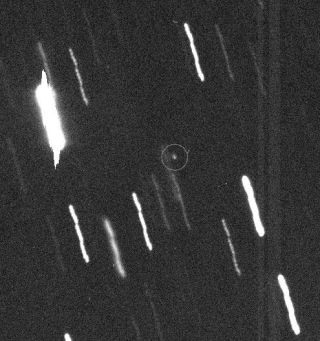 In 2004, NASA scientists announced that there was a chance that Apophis, an asteroid larger than two football fields, could smash into Earth in 2029. A few additional observations and some number-crunching later, astronomers noted that the chance of the planet-killer hitting Earth in 2029 was nearly zilch.

Now, reports out of Russia say that scientists there estimate Apophis will collide with Earth on April 13, 2036. These reports conflict on the probability of such a doomsday event, but the question remains: How scared should we be?

“Technically, they’re correct, there is a chance in 2036 [that Apophis will hit Earth]," said Donald Yeomans, head of NASA’s Near-Earth Object Program Office. However, that chance is just 1-in-250,000, Yeomans said.

The Russian scientists are basing their predictions of a collision on the chance that the 900-foot-long (270 meters) Apophis will travel through what’s called a gravitational keyhole as it passes by Earth in 2029. The gravitational keyhole they mention is a precise region in space, only slightly larger than the asteroid itself, in which the effect of Earth's gravity is such that it could tweak Apophis' path.

“The situation is that in 2029, April 13, [Apophis] flies very close to the Earth, within five Earth radii, so that will be quite an event, but we’ve already ruled out the possibility of it hitting at that time,” Yeomans told Life’s Little Mysteries. “On the other hand, if it goes through what we call a keyhole during that close Earth approach … then it will indeed be perturbed just right so that it will come back and smack Earth on April 13, 2036,” Yeomans said.

The chances of the asteroid going through the keyhole, which is tiny compared to the asteroid, are “minuscule,” Yeomans added.

The more likely scenario is this: Apophis will make a fairly close approach to Earth in late 2012 and early 2013, and will be extensively observed with ground-based optical telescopes and radar systems. If it seems to be heading on a destructive path, NASA will devise the scheme and machinery necessary to change the asteroid’s orbit, decreasing the probability of a collision in 2036 to zero, Yeomans said.

There are several ways to change an asteroid’s orbit, the simplest of which is to run a spacecraft into the hurtling rock. This technology was used on July 4, 2005, when Deep Impact smashed into the comet Tempel 1.

This story was provided by Life's Little Mysteries, a sister site of SPACE.com.