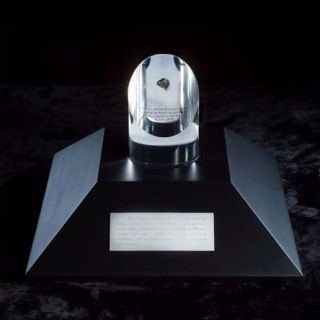 NASA presented its first Ambassador of Exploration Award to former astronaut Gene Cernan, who commanded the Apollo 17 lunar landing mission, during a May 12, 2005 ceremony at the U.S. Naval Air Station in Pensacola, Fla. The award features a piece of moon rock and will remain on display at the National Museum of Naval Aviation.
(Image: © NASA.)

Apollo 17 Commander Eugene Cernan today received NASA's first Ambassador ofExploration Award during the Naval Aviation Symposium at the U.S. Naval AirStation in Pensacola, Fla. The award, which features a piece of moon rock, willremain on display at the National Museum of Naval Aviation.

In a letter read to Cernan at today's symposium, NASA Administrator MichaelGriffin wrote, "Your outstanding service on three space missions,including two Apollo voyages to the moon, and your challenge to America's youthto 'take us back out there where we belong,' have demonstrated the essence ofwhat our Ambassador of Exploration Awards are all about."

The Ambassador of Exploration Awardwas announced last July during the 35th anniversary celebration of the Apollo11 lunar landing. It recognizes the sacrifices and dedication of the Apollo,Gemini and Mercury veterans.

Each astronaut or their survivingfamily will be presented with a lunar sample, part of the 842 pounds of moonrock and soil returned during the six moon landings from 1969 to 1972. CBSanchor Walter Cronkite is also an honoree.

Cernan, a Captain in the U.S. Navy, lefthis mark on the history of exploration by flying three times in space, twice tothe moon. He also holds the distinction of being the second American to walk inspace and the last human to leave his footprints on the lunar surface.

He was one of 14 astronauts selectedin October 1963. He piloted the Gemini 9 mission with Commander Tom Stafford ona three-day flight in June 1966. Cernan logged morethan two hours outside the orbiting capsule.

In May 1969, he was the lunar modulepilot on Apollo 10, the first lunar orbit test of the lunar module. The missionconfirmed the performance, stability, and reliability of the Apollo spacecraft.The flight included coming within eight miles of the moon's surface.

As he left the lunar surface, Cernan said, "America's challenge of today has forgedman's destiny of tomorrow. As we leave the moon and Taurus-Littrow,we leave as we came, and, God willing, we shall return, with peace and hope forall mankind."

The Ambassador of Exploration Awardsremains NASA's property. The recipients, working with the space agency, selecta museum or other educational institution where their awards will be displayedin their name to help inspire a new generation of explorers.

As an Ambassador of Exploration, therecipients will help NASA communicate the benefits of space exploration andwork to inspire students to pursue careers in science, mathematics andengineering.