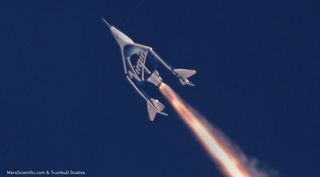 Virgin Galactic said the several hundred million dollars it raised through the merger with SCH will allow it to move into commercial operations of its SpaceShipTwo suborbital vehicle.
(Image: © MarsScientific.com & Trumbull Studios)

CAMBRIDGE, Mass. — Virgin Galactic announced July 9 it had reached an agreement to merge with a public investment vehicle, raising several hundred million dollars of capital and allowing the company to become publicly traded.

Virgin said that it will merge with Social Capital Hedosophia (SCH), which will take a 49 percent stake in the merged company at a valuation of $1.5 billion. Chamath Palihapitiya, the venture capitalist who is the founder and chief executive of SCH, will invest an additional $100 million into the company.

SCH is what is known as a special purpose acquisition company, a publicly traded company that raises money for the purpose of acquiring other companies. It reported having nearly $709 million in assets, primarily in the form of marketable securities, in its most recent Form 10-Q filing with the U.S. Securities and Exchange Commission in May.

The merger will give Virgin Galactic the additional capital it says it needs to enable full commercialization of its SpaceShipTwo suborbital vehicle, which is nearing the final phases of its test program.

'This transaction represents the next step of our exciting journey," said George Whitesides, chief executive of Virgin Galactic, in a statement. "We believe it will offer us the financial flexibility to build a thriving commercial service and invest appropriately for the future."

Whitesides will remain chief executive of Virgin Galactic after the merger closes, which the companies expect to take place later this year. Palihapitiya will serve as chairman of the company. Once the deal closes, Virgin Galactic will be publicly traded.

"We are confident that [Virgin Galactic] is light years ahead of the competition," Palihapitiya said in the statement. "It is backed by an exciting business model and an uncompromising commitment to safety and customer satisfaction. I cannot wait to take my first trip to space and become an astronaut."

Virgin Galactic is, in fact, in close competition with Blue Origin, the spaceflight company funded by Amazon.com founder Jeff Bezos. Blue Origin has been testing its own suborbital vehicle, New Shepard, for several years, and Bezos said as recently as last month that he expected the vehicle, whose test flights have been uncrewed to date, to start carrying people later this year.

Virgin Galactic has flown SpaceShipTwo beyond the 50-mile (80-kilometer) altitude it considers the boundary of space twice, most recently in February. The company announced in May it was shifting flight operations from the Mojave Air and Space Port in California to Spaceport America in New Mexico. Test flights will resume from that spaceport later this year, followed by commercial operations.

"Great progress in our test flight program means that we are on track for our beautiful spaceship to begin commercial service," Richard Branson, the founder of Virgin Galactic, said in a statement. "By embarking on this new chapter, at this advanced point in Virgin Galactic's development, we can open space to more investors and in doing so, open space to thousands of new astronauts."

Branson had made it clear he was looking for new investors for Virgin Galactic. In October 2017 Virgin announced an initial agreement with the Public Investment Fund of Saudi Arabia that would have resulted in a $1 billion investment in Virgin's space companies, including Virgin Galactic. A year later, though, Branson said the agreement had been cancelled, in reaction to the murder of journalist Jamal Khashoggi by the Saudi government.

After SpaceShipTwo's first flight beyond 80 kilometers in December, Branson said he expected that achievement to attract new investors. "By being successful today, I suspect we'll bring in other investors to help us take it on to the next stage," he said then, noting that he had invested about $1 billion of his own money into the venture.

The company noted in the statement that the $1.5 billion valuation of the merged company was 2.5 times greater than its projected 2023 revenue, which would be $600 million. It is also a 5.5 multiple of its projected earnings before interest, tax, depreciation and amortization (EBITDA), which works out to about $270 million. Those projected revenues and earnings, the company said in the statement, reflect the period when "commercial operations are expected to achieve scale" for Virgin Galactic.