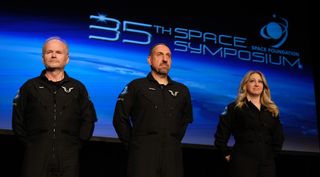 Virgin Galactic's Dave Mackay, Mike Masucci and Beth Moses on stage at the 35th Space Symposium April 9 to receive their FAA astronaut wings they earned after a Feb. 22 flight of SpaceShipTwo to the edge of space.
(Image: © Tom Kimmell)

COLORADO SPRINGS — Virgin Galactic's chief pilot believes the company will be able to go through the remainder of its SpaceShipTwo test program fairly quickly once test flights of the suborbital spaceplane resume.

In an interview during the 35th Space Symposium here April 9, Dave Mackay said the SpaceShipTwo vehicle called VSS Unity, which he piloted to the edge of space on a test flight Feb. 22, is currently undergoing work that includes outfitting the interior with the cabin the company plans to use on commercial flights that will carry space tourists.

"The next time it flies, we expect to have the full commercial cabin installed," he said. A few other modifications to the vehicle are also in progress, such as changes to cockpit displays.

"This downtime might be fairly long," he said. "Once we get out of that, we should be able to get through the remainder of the test program pretty quickly and get into commercial service."

He didn't specify when test flights might resume and how long it would take to complete those remaining test flights. Company founder Richard Branson has expressed his desire in recent months to start commercial flights this year, perhaps as soon as July, and confirmed he plans to be on that first commercial flight.

Mackay, co-pilot Mike Masucci and Beth Moses, the company's chief astronaut instructor, all praised the vehicle's performance on that February test flight, the most recent one by the vehicle. On that flight the vehicle flew to an altitude of nearly 90 kilometers, the second time SpaceShipTwo exceeded the 50-mile boundary used by U.S. government agencies for awarding astronaut wings.

"The way it flew on that flight was as good as I could ever have hoped for," Mackay said. "I was delighted with the way the vehicle flew."

That included not just the rocket-powered phase of the flight, which Masucci described as "smooth," but also the experience as the vehicle coasted near apogee. "It was extremely quiet," he said. "To take that all in was very surreal."

This was the first SpaceShipTwo flight with a third crewmember, Moses, on board, to evaluate the experience from the perspective of future customers. "My cabin evaluation turned out to be very textbook," she said. "I got all the data, plus, that I wanted to."

Part of her work, she said, was to calibrate how long certain aspects of the flight last, both in actual time and how it's perceived. One example of the difference between actual and perceived time, she said, was the period after SpaceShipTwo is released from its WhiteKnightTwo aircraft and before it ignites its rocket motor. "It was exactly per plan, but felt many-fold longer than I anticipated," she said. Those insights will help refine the training program for the company's customers.

Another aspect of the flight they remarked on was the reentry, which was loud, but not overly so, as the vehicle encountered the upper atmosphere and slowed down. "What I didn't expect was how visceral entry felt," she said. "Entry was dramatic."

"It kind of delineates the boundary between the space experience and the atmosphere," Mackay said. "It emphasizes that you have actually been to a special place."

They also emphasized that the view from the vehicle is something that photos and video alone can't duplicate. "That view was otherworldly," Masucci said. "No camera or no video can ever do it justice because it's a totally sensory experience."

"Everybody's seen pictures of the Earth from space, but for real it looks different because the sky is intensely black," Mackay said. "The Earth is incredibly bright, and cameras or videos don't capture that in the same way as the human eye does."

Moses, who said she "skipped off the plane with a smile" after the test flight, doesn't know if she'll get another chance to fly. While future test flights will carry more people on board, there are others who may fly on those tests, as well as, later, the company's customers once commercial operations begin. "I am equally dying to fly again, and yet want to bring that experience to as many people as I can."

The three were at the Space Symposium for an April 9 ceremony where they received commercial astronaut wings from the Federal Aviation Administration. The agency has now awarded seven such wings, five of which have gone to Virgin Galactic crew members.

"It brings us another step closer to realizing the dream of regular and routine commercial human spaceflight," said Wayne Monteith, associate administrator for commercial space transportation at the FAA, who pinned the wings on Mackay, Masucci and Moses in an on-stage ceremony between plenary talks at the conference.

The three said in the later interview that the wings were an honor as much for the company as for themselves. "This really belongs to the whole company," Mackay said. "I don't view it as my wings more as wings for the company."