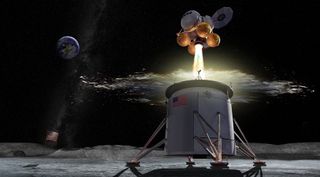 NASA should apply lessons learned from the commercial crew program for Artemis, particularly for the development of lunar landers, according to the agency's safety panel.
(Image: © NASA)

WASHINGTON — As NASA starts development of lunar landers for Artemis, it should carefully incorporate the lessons learned from the commercial crew program, a safety panel advised.

At a June 6 meeting of the Aerospace Safety Advisory Panel (ASAP) at NASA Headquarters, members said that while the new goal of landing humans on the moon by 2024 has benefits, that accelerated efforts must not jeopardize safety.

"The sense of schedule urgency can be positive and effective, but should not be a pressure that engenders decisions or actions that undermine mission assurance and safety," said Patricia Sanders, chair of the panel. "Success will necessitate embracing lessons learned from models such as that used in the commercial crew program while still maintaining the fundamentals of effective design, system engineering and test."

Among those lessons, they said, is how the agency can work effectively with commercial partners. "One of the key takeaways from the commercial crew program and a lesson for the future is the close interaction between the government program office and the contract partners," she said. That includes shared responsibility and "mutual transparency" between NASA and the commercial crew companies, Boeing and SpaceX.

The use of non-traditional contracting mechanisms, like broad agency announcements and Space Act Agreements, is also another lesson the panel highlighted. Those approaches "can result in significantly lower development costs," said ASAP member George Nield. "At the same time, that approach puts a lot more responsibility on the government to make sure that the requirements are correct at the start of the program and guarantee that there's a way for the government to step in and appropriately respond to unexpected developments or technical surprises."

NASA has indicated that, unlike the Space Launch System and Orion programs that are run more traditionally, it will use a model like that of the commercial crew program for lunar landers. "What we're going to do is buy a service," NASA Administrator Jim Bridenstine said in a June 7 speech at the National Space Society's International Space Development Conference. "We're not going to purchase, own and operate the lander. We're going to buy the service."

Doing so could allow NASA to support multiple companies through at least the early stages of the lander development program. "It's very important many times to not only have multiple providers but having dissimilar approaches to how they're meeting the need," Sanders said at the ASAP meeting. "The landers would be a very good place to have some dissimilar approaches and to carry those along not just in the very initial proposal stage but possibly all the way through flight."

The 45-minute public ASAP meeting offered few updates on the commercial crew program itself, including the status of the investigation into the April test incident that destroyed a SpaceX Crew Dragon spacecraft being prepared for an in-flight abort test. That investigation, led by SpaceX with participation from NASA, the FAA and the National Transportation Safety Board, is ongoing.

ASAP member Susan Helms noted that SpaceX was already making modifications to the Crew Dragon. "They have found some opportunities for improving the design of the Dragon capsule" even though the investigation is not yet complete, she said. "The fact that they are adaptable and agile on design changes on things they see they can improve on the current schedule timeline and cost is, we think, a positive aspect of the culture."