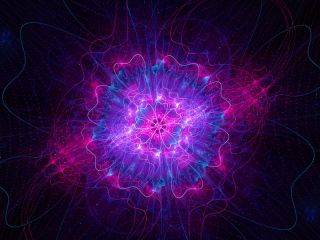 Nobody messes with the Large Hadron Collider. It's the supreme particle smasher of the present age, and nothing can touch its energy capabilities or ability to study the frontiers of physics. But all glory is transitory, and nothing lasts forever. Eventually, somewhere around 2035, the lights at this 17-mile-long (27 kilometers) ring of power will go out. What comes after that?

Competing groups around the world are jostling to secure financial backing to make their pet collider ideas the next big thing. One design was described Aug. 13 in a paper in the preprint journal arXiv. Known as the Compact Linear Collider (or CLIC, because that's cute), the proposed massive, subatomic rail gun seems to be the front-runner. What is the true nature of the Higgs boson? What is its relationship to the top quark? Can we find any hints of physics beyond the Standard Model? CLIC may be able to answer those questions. It only involves a particle collider longer than Manhattan.

The Large Hadron Collider (LHC) smashes together somewhat-heavy particles known as hadrons (hence the facility's name). You have a bunch of hadrons inside your body; protons and neutrons are the most common representatives of that microscopic clan. At the LHC, round and round the hadrons go in a giant circle, until they approach the speed of light and commence smashing. While impressive — the LHC reaches energies unmatched by any other device on Earth — the whole affair is a tad messy. After all, hadrons are conglomerate particles, just bags of other, tinier, more fundamental things, and when hadrons smash, all their guts spill all over the place, which makes analysis complicated.

In contrast, CLIC is designed to be much simpler, cleaner and more surgical. Instead of hadrons, CLIC will accelerate electrons and positrons, two light, fundamental particles. And this smasher will accelerate particles in a straight line, anywhere from 7 to 31 miles (11 to 50 km), depending on the final design, right down the barrel.

All this awesomeness won't happen all at once. The current plan is for CLIC to get going at lower capacity in 2035, right when the LHC is winding down. First-generation CLIC will operate at a mere 380 gigaelectronvolts (GeV), less than one-thirtieth of the maximum power of the LHC. In fact, even the full operational power of CLIC, currently targeted to 3 teraelectronvolts (TeV), is less than a third of what the LHC can do now.

So, if an advanced, next-generation particle collider can't beat what we can do today, what's the point?

CLIC's answer is to work smarter, not harder. One of the main science goals of the LHC was to find the Higgs boson, the long-sought particle that lends other particles their mass. Back in the 1980s and 1990s, when the LHC was being designed, we weren't sure the Higgs even existed, and we had no idea what its mass and other properties were. So we had to build a general-purpose instrument that could investigate many types of interactions that could all potentially reveal a Higgs.

And we did. Hooray!

But now that we know that the Higgs is a real thing, we can tune our colliders to a much narrower set of interactions. In doing so, we'll aim to manufacture as many Higgs bosons as possible, collect heaps of juicy data and learn much more about this mysterious, but fundamental particle.

And here comes perhaps the oddest bit of physics jargon you're likely to encounter this week: Higgsstrahlung. Yup, you read that right. There's a process in particle physics known as bremsstrahlung, which is a unique kind of radiation produced by a bunch of hot particles crammed into a tiny box. By analogy, when you slam an electron into a positron at high energies, they destroy each other in a shower of energy and new particles, among them a Z boson paired with a Higgs. Hence, Higgsstrahlung.

At 380 Gev, the CLIC will be a Higgsstrahlung factory extraordinaire.

Beyond the top quark

In the new paper, Aleksander Filip Zarnecki, a physicist at the University of Warsaw in Poland and a member of the CLIC collaboration, explained the current status of the facility's design, based on sophisticated simulations of the detectors and particle collisions.

The hope with CLIC is that by simply producing as many Higgs bosons as possible in a clean, easy-to-study environment, we can learn more about the particle. Is there more than one Higgs? Do they talk to each other? How strongly does the Higgs interact with all the other particles of the Standard Model, the mainstay theory of subatomic physics?

The same philosophy will be applied to the top quark, the least well understood and rarest of the quarks. You probably haven’t heard much about the top quark because it’s kind of a loner - it was the last quark to be discovered, and we only ever see it rarely. Even at the initial stages, CLIC will manufacture around 1 million top quarks, providing a statistical power unheard of when using the LHC and other modern-day colliders. From there, the team behind CLIC hopes to investigate how the top quark particle decays, which happens very rarely. But with a million of them, you just might be able to learn something.

But that's not all. Sure, it's one thing to flesh out the Higgs and top quark, but the smart design of CLIC enables it to push past the boundaries of the Standard Model. So far, the LHC has come up dry in its searches for new particles and new physics. While it still has plenty of years left to surprise us, as times goes on, the hope is dwindling.

Through its raw production of countless Higgs bosons and top quarks, CLIC can look for hints of new physics. If there's some exotic particle or interaction out there, it could subtly affect the behaviors, decays and interactions of these two particles. CLIC may even produce the particle responsible for dark matter, that mysterious, unseen matter that alters the course of the heavens. The facility won't be able to see dark matter directly, of course (because it's dark), but physicists can spot when energy or momentum has gone missing from the collision events, a sure sign that something funky is going on.

Who knows what CLIC might discover? But no matter what, we have to go beyond the LHC if we want a decent chance at understanding the known particles of our universe and uncovering some new ones.

Paul M. Sutter is an astrophysicist at The Ohio State University, host of "Ask a Spaceman" and "Space Radio," and author of "Your Place in the Universe."