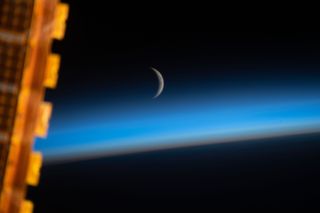 An astronaut captured this image of the crescent moon from the International Space Station while the orbiting laboratory was above the Sea of Japan.
(Image: © NASA)

An astronaut's vantage point offers a stunning view of not just Earth, but also our nearest neighbor, as proved by this newly published photograph of the moon.

NASA released the image today (May 13) and indicated in note on the photo that it was snapped by a member of the Expedition 59 crew. Those astronauts are currently living onboard the International Space Station. But the agency didn't list a specific date for when it was taken or astronaut photographer.

The image was snapped while the station orbited above the Sea of Japan, NASA's note continued, and shows a waxing crescent moon as well as the edge of one of the space station's solar panels. The photograph was taken at the beginning of an orbital sunrise, which occurs every 90 minutes or so as the space station circles Earth.

Six astronauts are currently living at the orbiting laboratory: NASA's Anne McClain, Nick Hague and Christina Koch; Russian cosmonauts Oleg Kononenko and Alexey Ovchinin; and Canadian Space Agency astronaut David Saint-Jacques. That crew will remain in place until June, when three of the crewmembers will head home to Earth.

The moon is currently waxing, transitioning from the new moon that occurred on May 4 to the full moon that will occur on May 18.