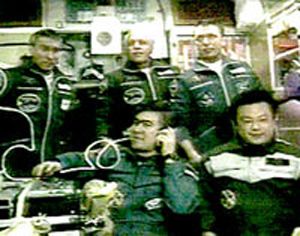 Krikalevand Phillips, the crew of ISS Expedition 11, are relieving the space station'scurrent caretakers - Expedition 10's Leroy Chiao and Salizhan Sharipov - who have been living aboard the outpostsince October 2004.

"Thanks fora great docking and thanks for coming," Sharipov told the arriving astronauts astheir Soyuz spacecraft docked at the ISS.

During therendezvous and docking, the ISS and Soyuz spacecraft passed into the Earth'sshadow, obscuring both vehicles in darkness.

"We aregoing into eclipse and it seems the station is disappearing," Krikalevtold Russian flight controllers. "We see the station to the right, butbarely."

"We're gladto have the Expedition 11 crew on board and look forward to the next week ofhand over activities," Chiao said during a video link with flight controllersand ISS program officials from Russia,Italy and the U.S.

Chiao,Sharipov and Vittori will return to Earth on April 24 after handing control ofthe ISS over to the Expedition 11 crew.

The fiveastronauts aboard the ISS have a busy day ahead of them.

Immediatelyafter a post-docking conference with flight controllers and space stationofficials, the joint-astronaut crew began an 11-hour work day. For Vittori,that means setting up the experiments he will work with over the next eightdays, while the Expedition 10 and 11 crews will begin unpacking the Soyuz TMA-6spacecraft.

Krikalevand Phillips are expected to be the first ISS crew in more than two years to beon station during a NASA space shuttle mission. The space agency's first twoshuttle flights since the Columbiaaccident are scheduled to visit the station during the six-month Expedition 11increment. The first shuttle flight, NASA's STS-114 mission aboard theDiscovery orbiter, is expected to arrive at the ISS sometime between May 15 andJune 3.

"In a way,it's a stepping stone in getting back on the track we were on before the Columbia accident,"Phillips said of the Expedition 11 mission during a preflight interview.

NASA's threeremaining orbiters have been grounded since the loss of Columbia and its crew on Feb. 1, 2003. Sincethen, ISS crews have relied on Russia'srobust Soyuz spacecraft to reach the station and return home.

Phillipsand Krikalev will conduct two spacewalks during their mission and receive twoautomated cargo shipments aboard Russian Progress spacecraft. They also hope toreceive a third crewmember during the second shuttle flight, STS-121 aboardAtlantis, during their ISS stay.

None of thenew ISS astronauts are strangers to the space station.

Krikalev issetting a series of spaceflight records during Expedition 11, among thembecoming the first Russian cosmonaut to fly six missions, the first astronautto visit the ISS three times and - at the end of this flight - the all-timehigh for time spent in space (800 days).

Phillipsand Vittori are both making their second trip to the space station, though Expedition11 marks the first long-duration flight for Phillips, who will serve as themission's NASA ISS science officer.