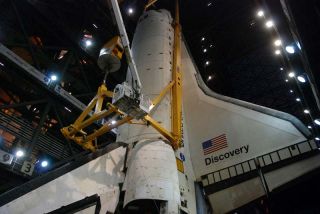 Spaceshuttle Discovery is set to make one last trip to the launch pad late Monday (Sept.20) to gear up for its final mission as NASA moves closer to retiring its orbiterfleet for good.

The shuttleis slated to begin the hours-long launch pad trek at 8 p.m. EDT (0000 GMT)tonight at NASA's Kennedy Space Center in Cape Canaveral, Fla. Hundreds of NASAworkers and their families are expected to be on hand to watch the shuttle'smove.

"It's asmall way to give back to the people who have given so much to the spaceshuttle program over the years," NASA spokesman Allard Beutel toldSPACE.com. "It's also a way for people to show their families all theirhard work. This is where they've been spending all the hours of theirtime."

Kennedy SpaceCenter workers and their families will have the opportunity to take pictures ofDiscovery, as the shuttle rolls out of theVehicle Assembly Building during the short trip to the seaside Launch Pad 39A.Astronauts from Houston will also be present to answer questions from thecrowd. ??

"A lotof these people have worked on the shuttle program for years but have never hadthe chance to take a picture in front of it," Beutel said.

The shuttle receiveda similar reception on Sept. 9, when NASA moved the orbiter from its hangar tothe Vehicle Assembly Building to be attached to its external tank and twinsolid rocket boosters.

Discovery isscheduled to launch Nov. 1 on an 11-day mission to the International Space Station that will mark the spacecraft'sfinal trip to space. The mission, STS-133, will be Discovery's 39th spaceflightand is expected to deliver a storage room to the International Space Stationalong with a humanoid robot assistant for the outpost's astronaut crew.

NASA willretire the three remaining shuttles in its fleet ? Discovery, Atlantis andEndeavour ? next year to make way for a new plan aimed at sending astronauts tovisit an asteroid by 2025. Discovery is the oldest of NASA's space shuttles.

Only two more shuttle missions are currently scheduled, includingDiscovery's November flight, before the reusable orbiter is retired. Theshuttle Endeavour is slated to fly the final shuttle mission in February 2011.

Congress isdiscussing the possible addition of one extra mission to be flown by Atlantissometime next year. The Senate has already approved the additional flight, butthe measure has yet to pass through the House.