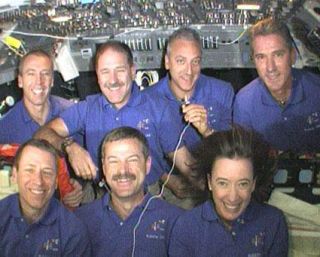 CAPECANAVERAL, Fla. - Stormy weather in Florida prompted NASA to forgo the first oftwo landing attempts for the space shuttle Atlantis today, giving the sevenastronauts aboard the spacecraft one more chance to return home on time.

Atlantiscommander Scott Altman and his crew hoped to land here at NASA?s Kennedy SpaceCenter at about 10:00 a.m. EDT (1400 GMT), but Mother Nature isn?tcooperating. Instead, NASA will target an 11:39 a.m. EDT (1539 GMT) returnfor the crew, the only remaining chance for a shuttle landing today.

?Theweather just is not clearing up at this point,? Mission Control called up toAtlantis. Thick clouds and lightning could be seen at the time over NASAspaceport, which has been battered by rain in recent days.

MissionControl radioed the astronauts early, before sunrise, to break the news so theycould avoid donning their bulky orange pressure suits and other chores.

?Weappreciate the early call,? Altman said, adding that he?ll take a look at theweather over Florida from space. ?We?ll see what it looks like as we go by.?

Altman andhis crew launched May 11 and are returning to Earth to end an 11-dayservice call on the Hubble Space Telescope. The astronauts performed fiveback-to-back spacewalks in as many days to make repairs and upgrades that left the19-year-old Hubble morepowerful than ever.

It wasNASA's fifth, and last, mission to Hubble before retiring its three-shuttlefleet next year and is expected to extend the iconicobservatory?s life through at least 2014.

If Atlantiscannot land today, NASA can try again on Saturday, when it would call up abackup runway at the Edwards Air Force Base in Southern California. The firstFlorida landing opportunity is at 9:16 a.m. EDT (1316 GMT), with the firstwindow in California opening about 90 minutes later.

In all, theshuttle would have two chances to land at each of the Florida and Californiarunways, NASA officials said.

NASAprefers to land space shuttles at the Kennedy Space Center because it is thehome port and launch site for the fleet. It also saves about $1.8 million and a weekof time required to return a shuttle from its backup runway in California toFlorida using NASA's modified 747 jumbo jet transport craft.