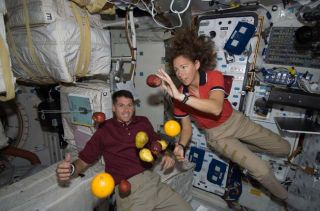 Astronauts aboardNASA?s shuttle Endeavour were due for some much-deserved rest Sunday to take abreak from a busy flight packed with space station upgrades and water recyclermalfunctions.

Endeavourcommander Chris Ferguson and his six crewmates have nearly half the day setaside for relaxation as they give the International Space Station the orbitalversion of an extreme makeover. Their space station crewmates, meanwhile, willtry to repair the station?s finicky new water recycler.

?They arenot scheduled for any activities,? said Ginger Kerrick, the mission?s leadspace station flight director, of the shuttle crew in a briefing late Saturday.?It?s been a long mission?they really need to take that time off.?

Endeavour launchedtoward the station Nov. 14 carrying a new member of the outpost?sthree-person crew and equipment required to set the stage for the push tofull six-person missions to the orbiting lab next May. In addition to the waterrecycler, which is working in fits and starts to processurine into drinking water, the astronauts delivered two spare bedrooms, asecond kitchen and bathroom, an all-in-one exercise machine and a space foodfridge.

While someof the astronauts installed that cargo and other fresh supplies, theircrewmates were working outside on three of the mission?s four spacewalks toclean and grease an ailing solar array gear. The next spacewalk is set forMonday to wrap up that work and perform other tasks.

But today,flight controllers hoped Endeavour?s crew will take in the view of Earth andother luxuriesof spaceflight.

?The view uphere is truly amazing,? Endeavour pilot Eric Boe said Friday. ?And justgetting thechance to float around and see how large the space station is, it?s an incrediblefeat that?s happened.?

Endeavourmission specialist Don Pettit, who lived aboard the space station for more thanfive months when it was much smaller, said before flight that he hoped to huntdown his favorite tools and other items he left behind. But he will likely notspend too much time at play today.

Known asthe WaterRecovery System, the intricate system is part of the space station?s $250million attempt at a U.S. regenerative life support system. It?s designed tocollect astronaut urine, wastewater and sweat from the cabin atmosphere, andthen distill it back into pure water for drinking, food preparation, oxygengeneration or other uses.

The systemmust function if the space station is to begin supporting double-sized crewsnext year. But a perplexing glitch with its urine processor has limitedoperations to around two hours at a time.

Kerrick saidengineers believe the cause is two-fold. First, a sensor appears to be cominginto contact with a centrifuge that spins urine in the distillation process,leading the motor driving the system to draw too much power and shut down. Then, a set to of isolators - shock absorbers to limit vibrations - may be making the glitch worse.

Fincke isexpected to spend about two hours removing the shock absorbers in an attempt toeliminate the interference.

?We neverknow what we?re going to get when we first flight test a piece of aerospaceequipment,? Fincke told reporters on Friday. ?As a flight test engineer, Ifully expected things not to work perfectly.?

Even withthe glitch, astronauts have managed to process some urine through the waterrecycler along with wastewater and condensate from the atmosphere. Some samplesof the water are being tested for purity aboard the station, while others willbe returned to Earth for analysis.

NASAengineers have planned about 90 days? worth of tests to ensure water recycledthrough the system is fit for consumption.

Fincke saidFriday that NASA engineers and the joint station-shuttle crew will find asolution to the water recycler?s woes.

?Sure,we?re scratching our heads on a few things, but I?m confident that, with thiscrew, there?s just no way that we can fail,? he said.