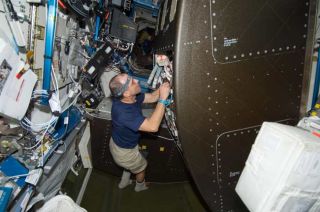 Efforts to runthe first batch of urine through station?s new Water Recovery System to test itsability to filterand purify water from the waste have hit repeated roadblocks over the lastfew days, station flight director Courtenay McMillan said in an afternoonupdate.

Whencommands were sent through the $250 million system?s Urine Processor Assemblyto begin filtering urine late Thursday, an alarm sounded that sent stationastronauts hunting for any signs of smoke or fire. It was a false, andunexpected, alarm that was even heard via radio by spacewalkersworking outside the station.

The urineprocesser was activated for about two hours today, but shut down unexpectedly. Theproblem could be due to a sensor glitch or the more serious malfunction of avital centrifuge motor used in one of the first steps of urine distillation,McMillan said.

Meanwhile,engineers hope to continue efforts to test the recycling system?s ability tocollect wastewater and condensed sweat from the space station?s atmosphere andfilter it into drinking water.

?We are hopingthat we can try again today just to get some more time with the system beforethe end of the mission,? McMillan said.

Endeavour?sseven-astronaut crew was slated to continue moving supplies into the stationtoday. All 10 astronauts aboard both spacecraft spoke with reporters on Earththis afternoon, with the shuttle crew also scheduled to take about and hour offlater in the day.

The waterrecycler is a key component in plans by NASA and its station partners toboost the orbital laboratory?s population from the current three-astronautcrews to six-person expeditions capable of performing more science andmaintenance. That shift is slated for May 2009, but only if the water recyclerand other key systems are online, mission managers have said.

If it worksas designed, the system is expected to drastically reduce the amount of waterthat has to shipped to the station aboard NASA shuttles or Russian, Europeanand, eventually, Japanese spacecraft.

The systemis designed to recover about 93 percent of the initial wastewater fed into it andcould reduce the amount of water hauled aboard or generated by visitingspacecraft by 15,000 pounds (6,803 kg) per year, mission managers have said.The resulting water can then be reused for drinking, food preparation orbathing. It could also be piped through the station?s U.S. oxygen generator toproduce new air.

Waterrecovered through the system is filtered through a seven-step process and meetsmost municipal water safety standards in the U.S., said Bob Bagdigian, NASA?sproject manager for the station?s environmental control and life support systembefore launch.

?These aregrowing pains we expected to see,? she said. ?These are very complicated piecesof equipment with a very complicated software system to control them, and thisis the first time they are all being put together in space. So it takes a whileto learn lessons from that.?

Kerricksaid there is ample time in the Endeavour crew?s schedule to troubleshoot theurine processor glitch while continuing tests on the regular wastewater side ofthe system. That part of the system can feed potable water through a localtank or feed it to a portable water dispenser on the station?s new galley.

Missionmanagers hope to return samples from each stage of the water recycling system,including the urine processor, back to Earth aboard Endeavour to begin qualitycontrol studies. Several months of additional testing and monitoring aboard thestation after Endeavour?s flight will also be required before the system willbe clear for human consumption, NASA officials have said.

?Right now,we can incorporate about a 24-hour delay in the tasks that we had planned inthe timeline and still be able - assuming everything else goes nominally - toaccomplish our sampling objectives,? Kerrick said. ?We think this is just asmall setback.?