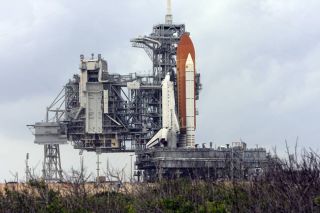 At NASA's Kennedy Space Center in Florida, space shuttle Endeavour reaches the top of Launch Pad 39A after rolling around from launch Pad 39B on Oct. 23, 2008.
(Image: © NASA/Troy Cryder.)

The spaceshuttle Endeavour is set for a Nov. 14 launch toward the InternationalSpace Station, where astronauts hope to deliver new gear that will prime theorbital outpost for double-sized crews, top NASA officials announced lateThursday.

Endeavouris slated to rocket toward the space station at 7:55 p.m. EST (0055 Nov. 15GMT) on a 15-daymission to deliver a new crewmember and equipment that will help boost theoutpost up to six-person crews. The spaceflight will mark NASA?s fourth shuttleflight of the year, the most since 2002.

Earliertoday, NASA officials also announceda new delay to a separate shuttle mission, the STS-125 flight of the Atlantisorbiter, to launch a seven-astronaut crew on the lastservice call to the Hubble Space Telescope. That mission was slated to flyin February after a data relay glitch aboard the telescope thwarted plans foran Oct. 14 blast off.

Hubble engineerssuccessfully switched the space telescope to a backup data relay system and, earlier today,released the firstnew image from the observatory since the Sept. 27 malfunction. But problems with aspare unit NASA hoped to launch aboard Atlantis to fix the ailing system forgood will add months of extra checks and tests, mission managers said.

Meanwhile,Endeavour will launch as planned with its own seven-astronaut crew.

Commandedby veteran astronaut Chris Ferguson, Endeavour?s STS-126 crew is slated toblast off from NASA?s Kennedy Space Center in Cape Canaveral, Fla., with apayload bay packed with a second space station kitchen, spare bathroom, newsleeping compartments, extra gym equipment and a water recycling system. Thenew gear is due to be installed and tested over the next few months to allowthe station to double its current three-person crew size in mid-2009.

?This is anextremely complicated mission for us,? said Bill Gerstenmaier, NASA?s spaceoperations chief.

Fergusonand his crew also plan to perform four spacewalks during the mission, which areprimarily aimed at cleaning and greasing up a balky solar array joint on thestation?s starboard side. The joint, which has been damaged by bits of metalgrit, is one of two designed to spin the station?s outboard U.S.-built solar arrays likepaddlewheels so they always face the Sun as the station orbits the Earth.

Magnus,however, plans a much longer stay in orbit than her crewmates. She will replacefellow NASA astronaut Gregory Chamitoff, who launched toward the station lastJune, as a member of the outpost?s Expedition 18 crew until her own replacementarrives in March.

?When weget six people up there, I think it?s big enough that it still won?t feel verycrowded,? Magnus said of helping to double the station?s crew size. ?But thiswill be very exciting.?