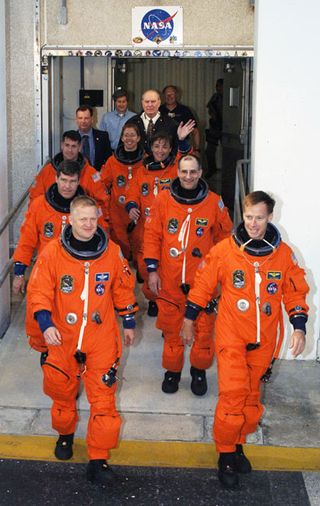 Theseven-astronaut crew of NASA?s shuttle Endeavour strapped into their spacecraftWednesday for a dress rehearsal of their planned November launch toward theInternational Space Station.

?Thetraining really is very important,? said Endeavour shuttle pilot Eric Boe, afirst-time spaceflyer, Tuesday from the launch site in Cape Canaveral, Fla. ?Forthree of us, this is the first chance we?ve had to actually get into a vehiclewhile it?s on the pad.?

The launch practice is part of NASA's traditional preflight Terminal CountdownDemonstration Test for shuttleastronauts. NASA mission managers are expected to meet Thursday to discussEndeavour?s status and set an official launch date for the spaceflight.

Commandedby veteran spaceflyer Chris Ferguson, Endeavour astronauts plan to ferry a newcrewmember, life support and gym equipment, closet-like bedrooms, a sparekitchen and a second bathroom to the space station during their15-day mission. Four spacewalks are planned during the flight to clean andgrease up a balky solar array joint on the station?s starboard side.

?We?returning the space station from a three-bedroom, one-bath outpost into afive-bedroom, two-bath orbiting laboratory from which we can conduct sciencefor the years to come,? Ferguson said Tuesday. ?It?ll also have a gym, and forthe first time we?re also going to have a small refrigerator. So asfar as crew amenities are concerned, I?d like to think that this mission isextremely important.?

By the endof the spaceflight, Ferguson and his crew hope to leave the space station readyto double its current three-person crews. The firstsix-person crew is slated to take up residence aboard the station nextyear.

Chamitoffjoined the station crew in June and will return aboard Endeavour, while Magnuswill await her replacement?s arrival early next year.

?We?ve beenanxious to get to a six-person crew for a very long time,? Magnus said. ?Andthis mission?s the first stepping stone toward that.?