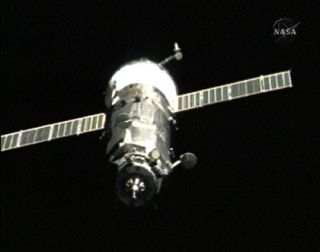 A view of the Progress 29 cargo carrier as it approaches the International Space Station for docking on May 16, 2008.
(Image: © NASA TV.)

The unmannedspace freighter Progress 29 successfully docked with the station at 5:39 p.m.EDT (2139 GMT) as both spacecraft flew 215 miles (346 km) above the AtlanticOcean, just off the coast of Brazil.

Volkov andfellow cosmonaut Oleg Kononenko, an Expedition 17 flight engineer, watched overthe arrival of Progress 29 from inside the station, where they were poised totake remote control of the cargo ship if its automateddocking systems failed. But the space freighter flew smooth and true.

Volkov,Kononenko and flight engineer Garrett Reisman of NASA are expected to open thehatches separating the station and its new cargo ship at about 7:30 p.m. EDT(2330 GMT) tonight. They will begin unloading spacecraft?s 4,657 pounds (2,112kg) of supplies on Saturday, NASA officials said.

A batch of90 snails also launchedto station aboard Progress 29 as part of an experiment that studies theeffects of weightlessness on living organisms, Russia?s Interfax News Agencyhas reported.

Russia?sunmanned Progress cargo ships are similar in appearance to the country?sthree-segment Soyuz spacecraft that routinely ferry astronauts to and from thespace station.

Progress 29was initially slated to dock at a berth on the station?s Russian-built Pirsdocking compartment, but that perch is currently occupied by the Soyuz TMA-12spacecraft that ferried Volkov and Kononenko to the station last month.

TheExpedition 17 crew was originally slated to move the Soyuz to the Zarya dockingport, clearing the Pirs berth for Progress 29, in early May. But Russian andNASA flight controllers canceled that short flight due to an ongoinginvestigation into a previous Soyuz spacecraft?s off-targetlanding last month.