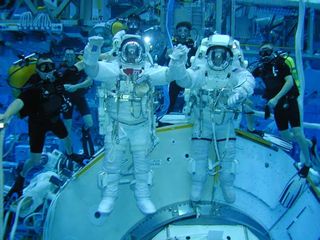 Europe has put out the call for newastronauts, signaling expectations for future manned missions to the InternationalSpace Station, the moon and more distant destinations.

?We want tofind high-caliber men and women in Europe to prepare to meet the challenges of ISS exploitation and humanexploration of our solar system in the 21st century," said Michel Tognini,former astronaut and chief of the European Astronaut Centre. "As of May2008, ESA will be searching in each of its 17 member states for the bestcandidates to make this vision a reality."

ESA's astronautrecruitment drive appears to anticipate a new wave of European humanspaceflight missions - although NASA's space shuttle fleet will retire in 2010,leavinga gap between then and the first launch of its capsule-based Orion successorin 2014. That leaves the Russian Soyuz spacecraft and perhaps private companiesto provide space access for the duration.

The agencybuilt the space station?s European Columbus laboratory, which astronautsdelivered in February, and successfullydelivered Jules Verne — the first of at least five Automated TransferVehicle (ATV) cargo ships — on April 3.

Thedouble-decker bus-sized ATV space freighters will haulfresh supplies to the ISS for ESA, the U.S.and other station partners in return for European astronaut slots on future long-durationcrews. A similar ESA astronaut hunt in 1992 stemmed from the agency?s Columbus laboratory project, the agencysaid.

Astronaut applicantswill have to provide the same medical examination certificates as privatepilots, as well as undergo psychological and professional aptitude evaluation,medical evaluation, and a formal interview process before an ESA selectionboard. Final appointments will receive their official announcement in 2009.

GerhardThiele, head of ESA?s Astronaut Division and a former spaceflyer, saidprospective candidates should be competent in a science discipline, such as life sciences, physics, chemistryand medicine. Engineers or pilots are also welcome to apply, he added.

Interested Europeanapplicants can check theagency?s Web site starting May 19, on the first step in the formalapplication. U.S. citizens who want to try for NASA's 2009astronaut class still have until July 1 to apply.