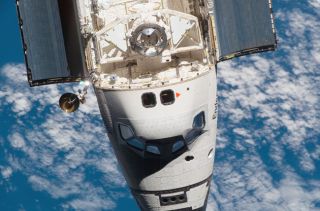 NASA's shuttle Endeavour is photographed by ISS astronauts during the STS-123 mission in March 2008.
(Image: © NASA.)

Commanded by veteran shuttle flyer Dominic Gorie, Endeavour and its crew are set to land tonight on a runway here at NASA's Kennedy Space Center and set a new record for the longest space station construction mission ever flown.

The shuttle is due to land at 7:05 p.m. EDT (2305 GMT) to conclude its 16-day mission, which delivered a storage room for Japan's massive Kibo lab and a giant Canadian-built maintenance robot called Dextre, to the space station among other tasks.

"It was an incredible run that we had and I'm not sure we could have done it without the guys around me," Gorie said of his crew.

Eyharts is returning to Earth after almost 50 days in space, which he spent activating the station's European-built Columbus laboratory. His replacement, NASA astronaut Garrett Reisman, launched aboard Endeavour on March 11 to begin his own two-month tour at the ISS.

During their flight, Endeavour astronauts swapped out one station crewmember before performing a record five spacewalks at the ISS to install the new hardware, inspect a balky solar array joint, test a goo-slinging tool designed to fix shuttle heat shield tiles and stow an orbiter inspection boom.

The $209-million Dextre robot has two 11-foot-long (3.4-meter) arms and is the final component for the station's robotic servicing system supplied by Canadian Space Agency. It is designed to replace spacewalking astronauts for routine repair calls outside the ISS.

The new Japanese storage module is a squat, 14-foot (4.5-meter) wide cylinder that will serve as an attic for the Japan Aerospace Exploration Agency's school bus-sized Kibo laboratory once it launches in late May.

"They're ready to go," said Richard Jones, Endeavour's entry flight director, of the homeward-bound shuttle crew. "They've got their game faces on."

Jones said Endeavour has two opportunities to land today; the 7:05 p.m. EDT touchdown about a half-hour before sunset and a night return that opens at 8:39 p.m. EDT (0039 March 26 GMT), or about one hour after sunset.

Current forecasts from NASA's Spaceflight Meteorology Group predict favorable flight conditions during both passes, though some scattered clouds are expected.

The difference between day and night landings is largely a preference of a mission's commander, Jones said.

Gorie and Johnson fired Endeavour's thrusters on Tuesday to give the spacecraft a slight speed boost, enough to squeeze in at least one daylight landing attempt. The astronauts also discovered a slight ding the size of a small ball bearing on one of Endeavour's windows, but the debris hit is minor and poses no threat to the shuttle or its crew, Jones said.

The shuttle has enough supplies to stay aloft until Friday, though NASA prefers to keep a couple of days in reserve in case of uncooperative weather or an unexpected glitch.

"The crew is doing very well and they're in very good spirits," Jones said. "You can see that they are ready to tackle anything thrown at them."

NASA roused the astronauts Wednesday morning with the song "Drops of Jupiter" by the band Train, a tune selected for Endeavour pilot Gregory H. Johnson.

"Wow, that's a great song to listen to on landing day. I'd like to thank my wife Carrie and my kids Matthew, Joseph and Rachel," Johnson said.

"This has been a two-week adventure and it's been a pleasure and honor to be on it," he said adding that his crew reveled in their challenges and success. "But in a bittersweet way, we're ready to get home."