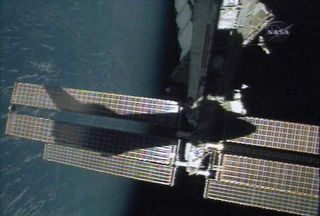 The shadow of NASA's space shuttle Endeavour is projected on solar arrays outside the International Space Station on March 23, 2008 during the STS-123 mission.
(Image: © NASA TV.)

HOUSTON -The seven astronauts aboard NASA?s shuttle Endeavour will cast off from theInternational Space Station (ISS) late Monday after a record-long stay at theorbiting laboratory.

Shuttlecommander Dominic Gorie and his crew will undock from the station at 7:56 p.m.EDT (2356 GMT) tonight, wrapping up a packed 12 days of construction to delivera Canadian-built robot and the first module of Japan?s massiveKibo laboratory.

?I sort oflooked at this flight sort of like a college team looking at MarchMadness?every spacewalk was a win, every robotics [operation] was a win,? Gorietold reporters on Earth during a Sunday crew conference. ?We?ve got a greatwinning team.?

Gorie andhis crew launched toward the station on March 11. They are set to landWednesday evening at 7:04 p.m. EDT (2304 GMT) at NASA?s Kennedy Space Center inCape Canaveral, Fla., to complete a record-setting 16-day mission to the ISS.

Station andshuttle astronauts will shut the hatches between their two spacecraft at about5:13 p.m. EDT (2113 GMT) today after a brief farewell ceremony.

?We?ve seensome incredible changes on the station and it?s been a real privilege to behere and see all that,? said the station?s Expedition16 commander Peggy Whitson, adding that she and crewmate Yuri Malenchenkohave welcomed the addition of three new modules in the last five months.

?It?s agreat moment, and it?s going to open up a new era for Japan and its space program,?said Japanese astronaut Takao Doi, who installed the Kibo module usingEndeavour?s robotic arm.

?I guess myonly regret is that I?ve gotten kind of used to hanging out with these guyshere in the blue shirts,? said Reisman, referring to his former shuttlecrewmates. ?I?m going to miss them.?

?Of course,I would love to stay longer up here on the station, but I think it?s time forme to go back,? Eyharts said Sunday.

BeforeEndeavour pulls away from the space station, pilot Gregory H. Johnson will flythe shuttle around the ISS on a victory lap of sorts while his crewmatesphotograph it from afar.

?I?m justlooking forward to getting to do some hand-flying on the vehicle,? Johnsonsaid, adding that Gorie gave him a few pointers earlier on Sunday. ?Dom is thebest coach I could hope for and I can?t wait to do it in real life.?