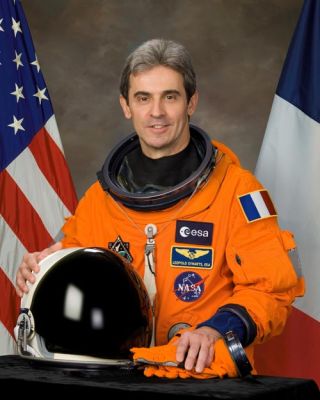 French astronaut Leopold Eyharts, mission specialist on STS-123 and representing the European Space Agency, poses for a preflight photo. He is also flight engineer on Expedition 16.
(Image: © NASA and ESA)

PERSONAL DATA: Born April 28, 1957, in Biarritz, France. He is married and has one child His hobbies are reading, computers and sport.

EDUCATION: Graduated as an engineer from the French Air Force Academy of Salon-de-Provence in 1979.

SPECIAL HONORS: Leopold Eyharts has been decorated with the French Legion d’Honneur, the Ordre National du Merite and Medaille d’Outre Mer, and the Russian medals of Friendship and Courage.

EXPERIENCE: He joined the French Air Force Academy of Salon-de-Provence in 1977 and was graduated as an aeronautical engineer in 1979. In 1980, he became a fighter pilot and was assigned to an operational Jaguar squadron in Istres Air Force Base (France). In 1985, he was assigned as a wing commander in Saint-Dizier Air Force base.

In 1988, he was graduated as a test pilot in the French test pilot school (EPNER) and was assigned to Bretigny flight test center near Paris. He then flew on different types of military and civilian aircraft including Mirage 2000, Alpha-jet, Mirage 3, Caravelle, C-160 mainly involved in radar and equipment testing.

He has logged 3500 flight hours as a fighter and test pilot in 40 different aircraft types, 21 parachute jumps including one ejection.

In 1990, Leopold Eyharts was selected as an astronaut by CNES (Center National d’Etudes Spatiales) and assigned to support the Hermes spaceplane program managed by the Hermes Crew office in Toulouse.

He became also one of the test pilots in charge of the CNES parabolic flights program, an experimental aircraft (Caravelle) managed by Bretigny Flight Test Center to provide a microgravity laboratory to the scientific community. In 1994, he was in charge of parabolic flight testing of the Caravelle replacement, an Airbus A300 which became operational in 1995.

In 1992, Leopold Eyharts participated in the second European Space Agency astronaut selection. At the end of the same year, he took part in an ESA evaluation of Russian “Bouran” Space Shuttle training in Moscow, where he flew in the Tupolev 154 Bouran in-flight simulator.

He also participated in two additional short-duration spaceflight training courses in Star City, Moscow—6-weeks in 1991 and 2-weeks in 1993.

Leopold Eyharts was assigned to full spaceflight training in January 1995. He trained as a back-up cosmonaut for the Cassiopeia French-Russian space mission, which took place in August 1996.

He was the prime cosmonaut for the follow-on CNES scientific space mission called “Pegase.” He flew in the Mir Space Station in February 1998. During the three week Pegase mission he performed various French experiments in the area of medical research, neuroscience, biology, fluid physics and technology. In completing his first space mission, he has logged 20 days, 18 hours and 20 minutes in space.

NASA EXPERIENCE: In August 1998, Leopold Eyharts was assigned by the European Space Agency to train as a mission specialist at NASA’s Johnson Space Center in Houston, Texas. As part of the international astronauts of the 1998 class, he attended Astronaut Candidate Training which included orientation briefings and tours, numerous scientific and technical briefings, intensive instruction in Shuttle and International Space Station systems, physiological training and ground school to prepare for T-38 flight training, as well as learning water and wilderness survival techniques. He was initially assigned to the Astronaut Office Space Station Operations Branch. Leopold Eyhart’s assignments include serving as a flight engineer to the Expedition-12 and Expedition-13 back-up crews.