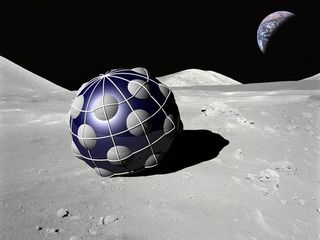 "It's not just a new mission," said Peter Diamandis, Chairman and CEO of the X PRIZE Foundation, during the announcement here at Google's headquarters. "It's a new way of doing business."

The new teams join the Isle of Man-based Odyssey Moon team that was the first group to take up the challenge.

Google co-founder Sergey Brin said he was amazed that so many competitors had signed up so soon after the prize's announcement.

"I was floored," Brin told the team members and reporters who attended the press conference. "We had no such expectation."

Brin credited Google's participation to conversation he had had with Diamandis and mutual friend and Silicon Valley entrepreneur-turned-rocket builder, Elon Musk, the founder of SpaceX.

Large companies often invest money in entertainment ventures or sponsor competitions and competitors in events like boat races, Brin said. But those ventures are limited in their purpose.

"We should be doing new kinds of things as companies," Brin said. "If we're going to sponsoring things it should be for discoveries."

The GoogleLunar X PRIZE Cup organizers also announced their partnership with Space Florida, a group vested in drawing the Sunshine State onto the commercial spaceflight map. Votedinto creation in 2006, the local organization is offering launch site servicesand $2 million in extra prize money to the winning team if they blast off from Florida.

"Florida's long been recognized as a preeminent leader in any activity that involves ourexploration of the moon," Kohler said. "Part of our effort as a stateand as an organization is to continue that legacy. We believe [thiscompetition] will allow the state to become a future hub for commercialprojects."

According to Google Lunar X PRIZE rules, 90 percent of a winning team's funding must come from the private sector to qualify for a piece of $30 million in total prize money.

The secondteam to achieve lunar victory by 2014 will take $5 million in prize money, andanother $5 million is on the table for difficult bonus objectives. Suchchallenges include moving a robot an extra 1,600 feet (500 meters), photographingman-made objects on the moon such as the Apollo 11 flag and surviving more thantwo weeks in frigid lunar darkness.

On top ofthe potential to win $25 million with a single launch, Alexander explained that Space Florida's extra funding is quite an incentive — especially toa number of teams aiming for a 2009 or 2010 launch.

"Amillion dollars is not trivial to any one of these teams, let alone two milliondollars," Alexander said. "I definitely think somebody's going tomake it and I think it's going to happen earlier than we expect."

Odyssey Moon, a team based out of Europe’s Isle of Man, was announced as the first competitor in December 2007. The group is hopeful their "MoonOne (M-1)" spacecraft will take the grand prize.

The nine newteams officially drafted into the competition today have submitted lengthy applications and $1,000 deposits.

"Tohave 10 teams now, so early on, is incredible and great," Alexander said,noting that the 1996 to 2004 Ansari X PRIZE for suborbital spaceflight tookyears — not a few months — to attract as many teams. "We thought it wouldtake longer for people to organize and get entered into this competition."

"Thefact that there are this many teams [competing] does give us some confidencethat someone should be able to prevail at the end of the day," Kohler saidof the numbers, which he explained will inevitably grow before the Dec. 31,2010, application cutoff.

"I'dsay that the teams out there have a high degree of credibility," he said."Several of them are really off and running full-steam aheadalready."