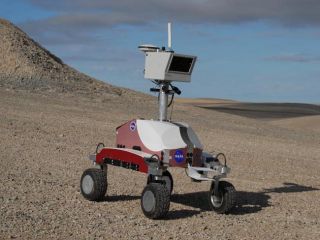 K-10 rover under test at Devon Island, developed by the NASA Ames Intelligent Robotics Group. The K-10 is an example of collaboration between space agencies and private enterprise, and is a prototype of robot explorers that can scout out the Moon. Optech, a private Canadian company and member of the Odyssey Moon team, provided the laser eyes that allow this NASA rover to see in 3D, even in the dark.
(Image: © Odyssey Moon)

GOLDEN, Colorado – Odyssey Moon, the first team to complete registration for the Google Lunar XPrize, will unveil its entry today.

The roboticrace to the Moon will be kick-started today by an international group seekingto win the $30 million purseestablished to spark a global, non-governmental rivalry with the aim of landingprivate spacecraft upon Earth's neighbor.

As a newlyestablished lunar enterprise based in the Isle of Man – located just off the westcoast of Great Britain – Odyssey Moon's inaugural mission will involve a smallrobotic lander designed to deliver scientific, exploration and commercial gear tothe surface of the Moon.

OdysseyMoon officials are set to reveal that its prime contractor for building their Moonlanding equipment is MacDonald, Dettwiler and Associates Ltd (MDA) of Canada. MDAhas a strong track record of success in providing space hardware, such asrobotic arms for the space shuttle and the International Space Station, keytechnology utilized in the U.S. Orbital Express Flight Demonstration Mission,and building commercial remote sensing radar spacecraft.

"Ourteam draws upon a substantial amount of business and technology expertise. Wetotally believe that this is technically feasible," said Robert Richards,founder and Chief Executive Officer of Odyssey Moon. He is Director of OptechIncorporated's Space Group of Ontario, Canada – an industrial partner on theteam – and also co-founded the International Space University in 1987.

"Webelieve there's going to be a 'Moon Rush' ? which means that there's a viable,supportable and sustainable commercial lunar business plan based on marketsthat we believe exist ? and will exist," Richards told SPACE.com.

The Google Lunar X Prize wasannounced mid-September, financially backed by Silicon Valley-based Google Inc.,working with the X Prize Foundationin Santa Monica, California. The competition solicits efforts of private groupsfrom around the world to land a privately funded robotic rover on the Moon thatis capable of completing several mission objectives, including trekking over thelunar surface for at least 1,640 feet (500 meters) and transmitting video,images and data back to the Earth.

"I'm very pleased to learn ofOdyssey Moon and the talent behind this team. It demonstrates that the startinggun for the private race to the Moon has truly been fired," said PeterDiamandis, Chairman andChief Executive Officer of the X Prize Foundation. "I am hoping that we will see atleast another dozen serious teams from around the Earth announcing their intentto compete in the months ahead," he told SPACE.com.

As evidenced by the high number ofregistration inquiries received since the Google Lunar X Prize was announced, Diamandisadded: "I am confident that the $30 million purse can be won in the2011-2013 timeframe."

Richardssaid that the Google Lunar X Prize was a catalyst to their plans – but thegroup had been shaping a lunar business strategy and a pathfinder mission tothe Moon for over a year. "There's going to be more and more demand forlower cost, reliable services to get to the Moon," he predicted.

Richards said that science,exploration and technology validation will be the Moon market needs ofgovernment enterprises. "There are ways that the private sector can play arole in helping them do that."

Moreover, there are ancillarymarkets that also constitute lunar dealing, Richards added, be it forentertainment, education, or novelty ideas. "But those are not drivingwhat we see as our business plan. We are an exploration company for lunarcommerce."

OdysseyMoon is open to international collaboration at several levels, Richards said,not only for the Google Lunar X Prize but to help shape the company's long-termbusiness plans for development of the Moon.

ThePlanetary Society has joined the Odyssey Moon team to assist in education andpublic involvement, as well as serving as an international and science liaison.

"Our goal is to have ourtechnical baseline [for the lunar hardware] developed by mid-2008, and we'llhave something to show about our technical path perhaps by this coming January,"Richards said. The group's approach is to create a streamlined, small team, hesaid, with an eye toward winning the Google Lunar X Prize in five years time.

"We have our choice oflaunchers around the world. We'll go with the most reliable at the mostreasonable cost," Richards said.

Odyssey Moon's location on the Isle of Man,situated in the heart of the British Isles, offers space legislation and taxregime benefits, Richards said. The country is an internally self-governingdependent territory of the British Crown. It is not part of the United Kingdom, but is a member of the British Commonwealth.

How much money is needed by OdysseyMoon in its shoot-for-the-Moon adventure?

There is one example to get a handleon financing the effort, Richards said, pointing to the winning of the $10million Ansari X Prize thanks to back-to-back suborbital flights ofSpaceShipOne in 2004.

"On the order of 30 million wasspent to win the $10 million prize ? so I think the same multiplier is going tobe true. You're looking at a $60 million to $100 million venture. I'd like tosee hundreds of millions of dollars of effort going into bringing down the costof access to the Moon ? to bring new innovation into commercial lunarenterprise," Richards said.

"We want to set the bar veryhigh ? and we do intend to win," Richards concluded.

For more details on the Google LunarX Prize, go to: http://www.googlelunarxprize.org/lunar