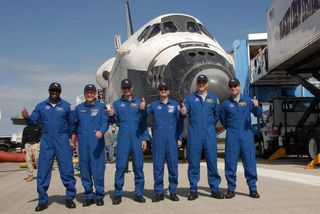 CAPECANAVERAL, Fla. - The seven astronauts of NASA?s shuttle Atlantis were glad tobe home Wednesday after a successful space station construction mission thatended with a smooth glide back to Earth.

Shuttlecommander Stephen Frick and his STS-122 crew celebrated their 13-day flight,which delivered the European-builtColumbus laboratory and a new crewmember to the International Space Station(ISS).

?Atlantiswas in super shape and took care of us,? said Poindexter, a first-timespaceflyer who took the shuttle?s controls Monday and flew a victory lap aroundthe ISS. ?We?re glad she?s safely back here.?

Missingamong the STS-122 crew was French astronautLeopold Eyharts, who launched aboard Atlantis Feb. 7, but stayed behind onthe space station to continue the commission of the ESA?s 1.4 billion euro ($2 billion) Columbus module.Eyharts replaced Tani, a U.S. astronaut who returned to Earth today after fourmonths in space.

?I was amazed?helooked better than I did,? Frick said of Tani, who has spent the last 120 daysliving in weightlessness aboard the ISS. ?He?s doing great.?

Schlegel, whosat out one the STS-122 crew?s three spacewalks due an illness but recovered intime to for the mission?s second excursion, said the spaceflight marked amilestone for Europe.

?From nowon, Europe has its presence in space,? Schlegel said, adding that the missionwas a experience of a lifetime. ?For ESA, for all of Europe, it?s the beginningof the human spaceflight.?

?One of thethings the station hasn?t been able to do yet as much as we had wanted isscience,? said Love, who helped install the lab and add exterior experimentsduring two spacewalks. ?It?s a privilege to me to be part of this wonderfulteam that?s put a dedicated science laboratory on station and put some new instrumentson the outside of it to do the work that station was intended for.?

Love?sspacewalking partner, veteran spaceflyer Rex Walheim, said he relished thechance to return to the ISS, which he last visited during a 2002 shuttle flight.

?It didfeel great to be back,? said Walheim, who got a chance to revisit the station trussworkthat he helped install on his earlier flight during the STS-122 spacewalks. ?It?sneat to see it expanding because it is bigger, there?s no question about it.?

But forMelvin, who like Poindexter and Love completed his first spaceflight, the mission was a model for teamwork. And when it comes to teamwork,Melvin — a former draft pick for the NFL?s Detroit Lions — would know.

?Theinternational flavor of this team, all the people working together to put this Columbusmodule in space has just been breathtaking,? Melvin said. ?Everyone working togetheris just a benefit to humankind, and something that?s going to carry us back tothe moon and Mars and beyond.?

In addition to clearing the way for future space station construction, Atlantis?successful landing cleared the way for the U.S.military?s plans to shootdown an ailing spy satellite. The U.S. Navy was waiting for Atlantis?return before pressing ahead with plans to destroy the bus-sized object before it enters the Earth?s atmosphere to prevent a half-ton load of toxicrocket fuel from endangering people on the ground.