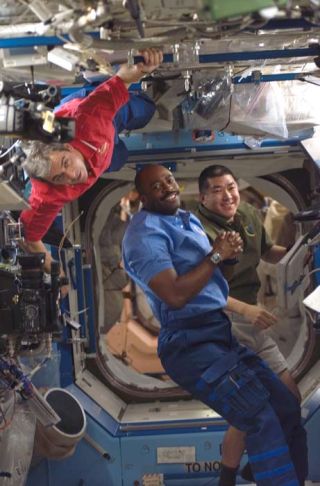 HOUSTON — The seven astronauts of NASA's shuttle Atlantis are spending Valentine's Day with their very own Dr. Love and are due for a break as they start up a new European lab at the International Space Station (ISS).

Dr. Stanley Love, an astronomer-turned-astronaut, and his STS-122 crewmates are scheduled to have a few hours off today to explore the ISS or peer down at their home planet before resuming work on the newly installed Columbus lab for the European Space Agency (ESA).

Flight controllers at NASA's Mission Control here at the Johnson Space Center roused the crew at 3:45 a.m. EST (0845 GMT) with the song "Consider Yourself at Home," a tune from the musical "Oliver!" played especially for Love by his family.

"That's a wonderful song, thanks so much for sending it," said Love, 42. He thanked his parents and family "and people who may be feeling there's one fewer Love on Earth this Valentine's Day. But I'd like to assure them that it's great to be up here, and I'll be home soon."

In addition to resting and working with the 1.4 billion euro ($2 billion) Columbus, Atlantis astronauts took an orbital call from German Chancellor Angela Merkel and ESA dignitaries. Among the spaceflyers launched to the ISS aboard Atlantis were ESA astronauts Hans Schlegel, of Germany, and Leopold Eyharts of France.

"It's still hard to believe that it's real," Eyharts said. "It went very fast."

Schlegel, a veteran astronaut, completed his first-ever spacewalk on Wednesday with crewmate Rex Walheim after missing an earlier outing due to an illness. All of Germany was proud of their astronaut's work, Merkel said.

"It was a pleasure to go out there," Schlegel said, adding that there was some tension since it was his first time, but the spacewalk went well. "You don't know you you're going to be and how you're going to reach because, of course, you're very high up there."

The Atlantis crew is the middle of what is now a 13-day mission to install Columbus and swap out one member of the space station's three-person Expedition 16 crew. Mission managers extended the spaceflight, which launched Feb. 7, by one day late Wednesday to give the astronauts more time to outfit the 23-foot (7-meter) long Columbus lab for orbital flight.

"Certainly we look forward to another day on board the space station," Atlantis commander Stephen Frick radioed down to NASA's Mission Control here at the Johnson Space Center after hearing of the extra day.

"We're going to finish outfitting the Biolab payload, which was delivered in the Columbus module, so that they can begin science operations immediately after undock," Spencer said in a Thursday mission status update.

The new module's activation was waylaid yesterday by a software glitch that prevented commands from the ESA's mission control center near Munich, Germany from uploading into Columbus. But by the day's end, flight controllers had fixed the problem and sent all the required commands, mission managers said.

"We're thrilled to be part of the activation of a brand new lab on the space station," Atlantis mission specialist Dan Tani told Munich flight controllers.

Tani is completing a two-month tour as part of the station's Expedition 16 crew and will return to Earth with Atlantis' STS-122 crew next week. Eyharts will replace Tani and stay aboard the station until NASA's next shuttle mission arrives in March.

The shuttle crew also received word that their spacecraft's heat shield was cleared for landing, which is now set for Feb. 20.

The 10 astronauts aboard Atlantis and the space station will also spend some time today preparing for a planned Friday spacewalk.

"That excursion, the third spacewalk of the STS-122 mission, will send Love and Walheim outside the ISS to attach science experiments to the exterior of Columbus, retrieve a broken gyroscope, inspect a balky solar wing joint and use a cobbled-together tool to determine whether a damaged handrail near the station's Quest airlock may pose a tear hazard for spacesuit gloves."

Love discovered the ding — which Mission Control gave the lighthearted name "Love Crater" — during a Monday spacewalk. Astronauts will wrap a metal tool with a spacesuit glove overwrap, known as an overglove, to test the ding's effect on spacesuit fabric.

"The crew is going to go out there and rub this on the handrail to see if there's any damage on the glove," Spencer said.