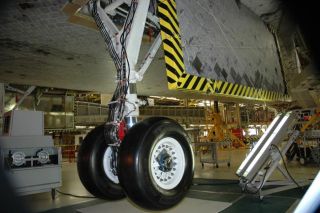 With repairs of the hydraulic leak completed, tests on Discovery's right landing gear have begun inside the Orbiter Processing Facility.
(Image: © NASA)

NASAengineers are testing new hydraulic seals aboard the space shuttle Discovery aftera swift week of repair work to ready the orbiter for a planned October launch.

Shuttleworkers installed the new seals after detectinga leak in one of four attached to a shock absorbing strut on Discovery?s rightmain landing gear. NASA postponed plans to begin attaching the shuttle toits external tank and rocket boosters this week at the Kennedy Space Center(KSC) in Cape Canaveral, Florida to repair the faulty seal.

?It wentquite well and there really weren?t any surprises,? NASA spokesperson GeorgeDiller told SPACE.com of the repair work.

So far, NASAshuttle workers have been able to complete the repairs within a five-day bufferbuilt into Discovery?s preparation schedule for its planned Oct. 23 launch to theInternational Space Station (ISS), Diller said.

Engineers planto perform checks on their seal repair work through Saturday, Diller said. Ifthe tests go well, Discovery is due to roll out of its work hangar on Sunday at5:30 a.m. EDT (0930 GMT) and be mated to its external fuel tank and solidrocket boosters inside the cavernous, 52-story Vehicle Assembly Building atKSC.

After abouta week of work, Discovery would then roll out to its seaside launch pad onSept. 30, NASA officials said.

Commandedby veteranshuttle flyer Pamela Melroy, Discovery?s STS-120 mission will deliver a newconnecting node to the ISS, swap one station crewmember and relocate an oldersolar array segment outside the orbital laboratory. She and her six shuttlecrewmates plan to perform five spacewalks to install the new node, move thesolar array module and test shuttle heat shield techniques during their 14-daymission.