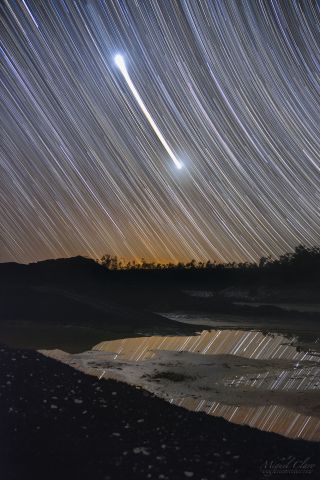 A star trail sequence of 390 images shows the path of the moon and the stars during the total lunar eclipse on Jan. 21, 2019.
(Image: © Miguel Claro)

Miguel Claro is a professional photographer, author and science communicator based in Lisbon, Portugal, who creates spectacular images of the night sky. As a European Southern Observatory Photo Ambassador and member of The World At Night and the official astrophotographer of the Dark Sky Alqueva Reserve, he specializes in astronomical "Skyscapes" that connect both Earth and night sky. Join Miguel here as he takes us through his photograph "Lunar Eclipse Trails."

A star trail sequence of 390 images shows the moon's path across the sky during the Super Blood Wolf Moon of Jan. 21, 2019, as seen from Mina de São Domingos at the Dark Sky Alqueva Reserve in Mértola, Portugal.

During a lunar eclipse, the full moon passes through Earth's shadow, giving the natural satellite a blood-red hue. The shadow is not so noticeable in this photo due to the long exposure technique I used, which overexposed the bright tail of the moon. [Amazing Photos of the Super Blood Wolf Moon of 2019!]

Because the moon was near the closest point to Earth in its elliptical orbit at the time of the eclipse, it was also called a "supermoon." Some stars are reflected in a small puddle of acid water at the old mine.