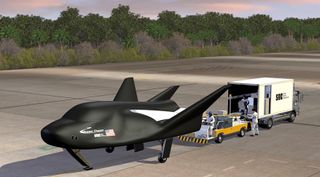 The Dream Chaser space plane is designed to return cargo to Earth by landing on a runway, allowing for rapid access.
(Image: © Sierra Nevada Corporation)

The company announced Dec. 18 that it completed a milestone in its Commercial Resupply Services (CRS) 2 contract called Integrated Review 4. With that milestone, the company is cleared to move ahead into assembly of the Dream Chaser vehicle that will deliver cargo to the station.

"NASA's acknowledgement that SNC has completed this critical milestone and its approval of full production of the first Dream Chaser spacecraft is a major indication we are on the right path toward increasing vital science return for the industry," John Curry, CRS-2 program director at the company, said in a statement announcing the milestone. [In Pictures: Dream Chaser Space Plane Aces Glide Flight]

SNC was one of three companies, along with incumbents SpaceX and Orbital ATK (now Northrop Grumman Innovation Systems), to receive CRS-2 contracts from NASA in January 2016. Each company is guaranteed at least six missions to the ISS under the contracts.

To carry out the missions, SNC proposed a cargo version of the Dream Chaser spacecraft it had been developing for NASA's commercial crew program. Although the vehicle was not selected by NASA when it awarded contracts instead to Boeing and SpaceX in 2014, SNC adapted the design with foldable wings, allowing it to fit within many existing payload fairings, and a cargo module.

While many elements of Dream Chaser were already in production, this review confirmed the overall design was ready for full-scale assembly and testing.

"IR4 was a series of reviews, documentation, and data deliverables that are the culmination of many years of design work, analysis and development testing," said Fatih Ozmen, co-owner and chief executive of SNC, in a statement. "This comprehensive review approved moving the Dream Chaser program into the production phase so we can get Dream Chaser to market as a critical space station resupply spacecraft as soon as possible."

The first Dream Chaser launch, on a United Launch Alliance Atlas V, is planned for no earlier than late 2020, a date that will depend on the status of vehicle development and cargo needs for the ISS.

SNC, though, is keeping its launch options open for future Dream Chaser missions. "We're looking at all launch vehicles out there," Steve Lindsey, vice president for space exploration systems at the company, said during a panel discussion Oct. 11 at the International Symposium for Personal and Commercial Spaceflight in Las Cruces, New Mexico.

Competition in the launch market has helped drive down costs for SNC. "When those launch vehicle prices come down — which, by the way, is about 80 percent of our costs on every mission we fly — that opens up the commercial market," he said. That includes other applications of Dream Chaser, such as a free-flying experiment platform.

At that conference, Lindsey said he expected to be "the majority of the way through" assembly and testing of the first Dream Chaser by next October, while planning "changes and upgrades" for a second vehicle.