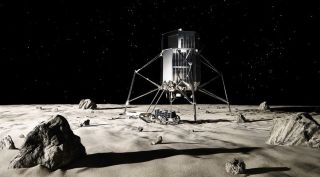 Draper's team includes ispace, a Japances company developing its own lunar landers (above), who will serve as the "design agency" for the Draper-led proposal.
(Image: © ispace)

LAS CRUCES, N.M. — The organization that helped NASA's Apollo spacecraft land on the moon a half-century ago is now working with an industry team that includes a Japanese lunar lander company to propose a commercial return to the lunar surface.

Draper announced Oct. 10 that the not-for-profit research and development company has submitted a proposal to NASA's Commercial Lunar Payload Services (CLPS) program for a small robotic lunar lander capable of carrying scientific payloads to the lunar surface. Proposals for the initial round of the CLPS program were due to NASA Oct. 9.

General Atomicswill be responsible for the manufacturing of the lunar lander. The company has built up its space capabilities in the last two years, acquiring smallsat developer Miltec in February 2016 and buying the Colorado factory of Surrey Satellite Technology Ltd.'s former U.S. subsidiary last November.

Spaceflight will be responsible for launch services for the lander. The company, which brokers rideshare launch services, announced a month ago that it arranged for the launch of another lunar lander, developed by the Israeli organization SpaceIL, that will launch late this year as a secondary payload on a SpaceX Falcon 9.

The other member of the team, ispace, will serve as what Draper calls the "design agent" for the lunar lander, while also providing rideshare services for additional payloads. The Tokyo-based company is developing its own lunar landers, and announced plans in September to launch its first two missions in 2020 and 2021, also as secondary payloads on Falcon 9 missions.

The teaming arrangement gives ispace an opportunity to participate in CLPS. The final request for proposals for the program, released Sept. 6, limits the competition to U.S.-based companies "for the purposes of industrial mobilization."

Draper, in its statement about its team, noted it complies with the "Domestic Source Certification" provision in the request for proposals, which requires that both the prime contractor "as well as all firms that construct, produce, manufacture or otherwise provide space transportation vehicles for the purpose of the prime contractor's performance of CLPS, must be United States commercial providers."

Draper joins what may be a crowded field of competitors for the CLPS competition. At least three other companies — Astrobotic, Masten Space Systems and Moon Express — were planning to submit bids as of last week. Those three companies had previously received NASA support through the Lunar Cargo Transportation and Landing by Soft Touchdown, or Lunar CATALYST, program where NASA provided technical support for those companies' proposed lunar landers.

NASA officials have said they expect to make an initial round of indefinite-delivery indefinite-quantity (IDIQ) awards for CLPS by the end of this year, which would be followed by task orders to the companies to carry specific payloads to the moon.

Those missions could launch as soon as 2019, although agency officials said it's more likely the first CLPS missions would not fly until at least 2020 based on the status of the companies anticipated to compete for the competition. Draper, in its announcement, did not specify when it expected its lander, called Artemis-7, would fly if it did receive a CLPS award.

The proposed lander is not the first time Cambridge, Massachusetts-based Draper has supported a lunar mission. As part of the Massachusetts Institute of Technology in the 1960s, the organization, then known as the MIT Instrumentation Laboratory and led by Charles Stark Draper, developed the guidance systems for Apollo. The renamed Draper Laboratory was spun out from MIT in 1973.

"Draper is proud of its long-standing relationship with NASA, and is excited to further strengthen that partnership with a team that will provide commercial lunar launch transportation and lunar landers and re-establish the moon as a destination for future human spaceflight," Seamus Tuohy, principal director of space systems at Draper, said in a statement. The organization noted that the "7" in Artemis-7 reflects that this will be Draper's seventh lunar landing mission, after the six Apollo lunar landings.